An alliteration too far? Or a totally toe-tingling truth?

I recommend that you, dear readers, hunker down with the 400+ pages of the paperback edition of “Southern Provisions; The Creation and Revival of a Cuisine” by David S. Shields. It’s a fascinating, scholarly, well researched, fulsomely bibliographed & fully foot-noted set of essays. Part of a movement that focuses on breeding only for taste, to reflect the water and soil (c.f. terroir) of a particular place. It’s also a hugely time-consuming process meaning that this taste is only ‘recoverable’ after several plantings of organics that serve to leech old pesticides & fertiliser residue away from the soil. He’s also aiming to recover and contextualise the lost breeds of the agricultural South, as part of a larger project of revitalising and recovering Southern cuisine — in all its complexities — by fighting against the stereotypical perceptions of it — certainly from outside the Southern states — as consisting of nothing but grits, fried chicken and BBQ.

The only caveat here is that he — at least in my view — imputes much more credit than is reasonable only to the white, slave owning, plantation owners, rather than to the slaves and indentured workers that, in counter-revisionist reality, were the main (only?) people really responsible for the care, attention and gene improvement of the breeds that he writes about.

That said, who am I to argue with Sean Brock 🙂

“People are always asking me what the most important book written about southern food is. You are holding it in your hands.”

The Delicious Taste Of Struggle

Why the hardest-working animals, plants, and microbes taste the best; a verity that I’ve banged on about before of course. Albeit mainly in terms of hard-working pigs rather than the entire natural world:

And this is a rather spectacular chart from Scientific American

[SIDE-BAR: this was a periodical that my Grand-dad used to buy for me, each month, over a number of years; I’m still grateful to him for helping to encourage my interest in science. It was in the October 1970 edition of Sci-Am that I first came across John Horton Conway’s ‘Game of Life’ cellular automata that I then went on to write the source code for, as part of my A-level in Computer Science. And if you want to geek out on what’s now possible in the game, a lot of which came along after I’d been looking at it, take a look at the Wiki article.] 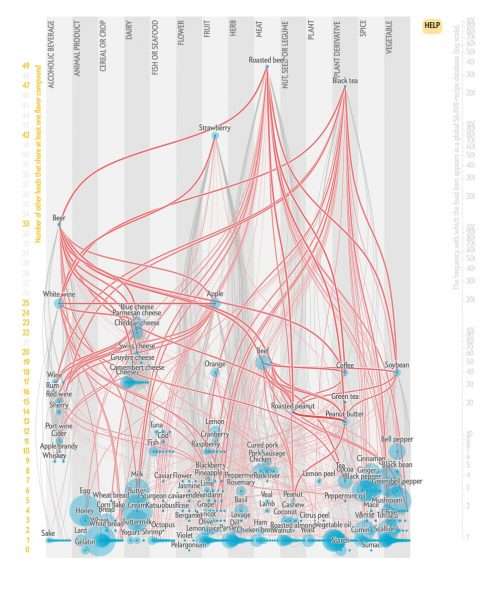 This is just a static graphic. The original on the site is interactive. It’s essentially a road-map to what tastes good with what. Think of basil and strawberries or shrimp and beef in the classic ‘surf & turf’; put together because, as they share certain chemical compounds, they’re natural complements, extracting more flavour from one another when combined than eaten when apart.
Interestingly, as anyone who’s eaten Asian foods will attest, they differ from those in the West as they plate each dish with individual favours sitting apart whereas here, we use these inter-related chemical overlaps.
Be aware that the Sci-Am one is a reinterpretation of an original flavour map created in 2011 by a Yong-Yeol Ahn. But this version, put together by the artist Tulp, is a genius level piece of data visualisation that will have you oooh-ing and aaaah-ing over the possibilities that open up. Think of it as a flavour family tree. 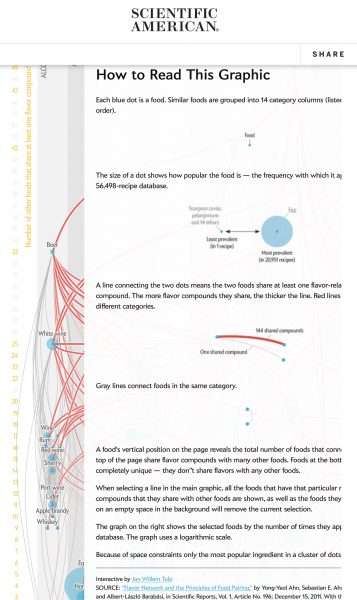