“Simply, umami is the deliciousness or savouriness of food,” says Trevor Blyth, former Roux Scholar and chef-proprietor of the White Fox in Tokyo. “Metaphorically, umami can be viewed as the dark matter of flavour; the difficult-to-describe element that holds all other tastes together.”

It’s a loanword from the Japanese (うま味) from which it can be translated as “pleasant savoury taste” originally by Professor Kikunae Ikeda who was the first to posit that this flavour existed, all the way back in 1908, from umai (うまい) “delicious” and mi (味) “taste”.

Following this discovery, Ikeda then went on to invent monosodium glutamate or MSG – perhaps the most infamous three-letter word in the history of food But forget the old wives tales you’ve heard about burning sensations, palpitations, chest pain, headaches, allergies, dehydration and anxiety etc. It’s crap.

David Chang of New York’s Momofuku is one of many top chefs who’ve defended it as a flavour enhancer and dispelled the myth of it being a chemical that makes people sick.

“MSG is a salt attached to glutamate and it’s delicious,” Chang told the audience at the MAD Symposium in 2012. “It’s mind-boggling to me that there is still so much pushback from Western culture. The evidence overwhelmingly shows that MSG is not harmful to you.”

Although it has become a 21st-century phenomenon, the idea of umami has been around for way longer than one might imagine – we just didn’t know it. “The concept [of umami] may be quite new, but the taste has been with us for [many] centuries in the stocks and sauces of Europe, the pizza of Italy, the broth of Japan, and the oyster sauce of China,” wrote Dr. Kumiko Ninomiya, director of the Umami Information Centre, in her paper “Umami: A Universal Taste”.

As far back as 3,000 years ago, Greeks and Romans used a condiment called garum – a fermented fish sauce – unwittingly boosting the umami in their foods. In 1825, in his famous treatise The Physiology of Taste, French gastronome Jean Anthelme Brillat-Savarin established the word “osmasome” for rich, meaty tastes, which has since been considered a forerunner of umami.

In 1985, at the Umami International Symposium held in Hawaii, umami was finally recognised as a distinct taste separate from that of the traditional four, known to everyone: sweet, salty, sour or bitter.

In 2000, scientists at the University of Miami discovered the existence of a specific taste receptor responsible for umami, while in 2009 a study published in the American Journal of Clinical Nutrition found that certain genes play a role in how sensitive we are to it.

Following Ikeda’s discovery, further research revealed that in addition to glutamate, umami is also imparted by DNA building blocks called ribonucleotides, which also occur naturally in many foods, particularly in meat and fish (inosinate) and in mushrooms (guanylate).

“Umami is part of the taste of food and it has a synergistic effect on other umami-rich foods,” explains Blyth. “Combine asparagus (glutamate) with bacon (inosinate) and mushrooms (guanylate) and the umami taste in all of the ingredients will be intensified.”

UNLEASHING THE UMAMI TSUNAMI:
While glutamate is found in many natural foods, certain cooking methods further enhance umami as they help to increase the level of amino acids and this can be achieved in a number of different ways. Cooking boosts umami in savoury foods such as meat, which isn’t umami when it’s raw as it is the cooking process that releases the glutamate. Similarly, curing meat or fish results in the breakdown of amino acids, which not only helps to preserve the meat, but also increases umami.

Fermentation frees the umami in things like soy sauce or kimchi, while ageing cheeses or drying mushrooms has a similar effect. Combining foods rich in glutamate and ribonucleotides is the key to unleashing umami, which is why age-old combinations such as Parmesan and tomatoes in pizza or kombu and katsuobushi in dashi are so popular. The umami taste can also be enhanced by condiments such as fish sauce or soya sauce to season a dish before serving or at the table.

“It induces salivation and a sensation of furriness on the tongue, and it stimulates the throat and the roof and the back of the mouth. Umami is palatable and has a long-lasting taste.”

A number of daily foods are rich in umami components as naturally occurring glutamate can be found in meats and vegetables (whereas inosinate comes primarily from meats and guanylate from vegetables). For example, mushrooms, particularly dried shiitake mushrooms, are rich sources of guanylate; smoked, fermented fish is high in inosinate, and shellfish in adenylate.

There are also some distinctions among stocks from different countries. In dashi, L-glutamate comes from sea kombu (Laminaria japonica) and inosinate from dried bonito flakes (katsuobushi) or small dried sardines (niboshi).

Finally and interestingly, many people have their first encounter with umami components in breast milk which contains roughly the same amount of umami as found in broths. 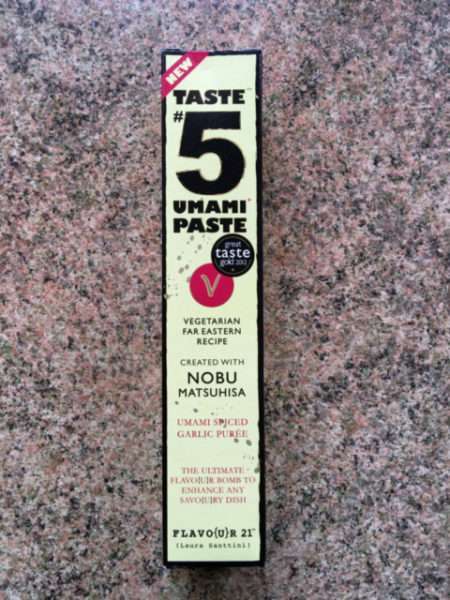 Marmite is high in glutamate and we mix it into butter. We then brush this lightly onto cooked fish, just before plating. It gives a real hit of seasoning without adding salt.
Sat Bains, chef-proprietor, Restaurant Sat Bains, Nottingham

I’m a big fan of Kikkoman Soy Sauce and use it in both savoury and sweet dishes, such as soy compressed apple tarte tartin. My tip is to put a few drops into base stocks to bring out and intensify the flavour while reducing.
Simon Hulstone, chef-proprietor, The Elephant, Torquay

Parmigiano Reggiano is an incredible ingredient, especially considering the transformation that takes place in the ageing process. Why do so many people add grated Parmigiano cheese to their food? Because it enhances the flavour.
Massimo Bottura, chef-proprietor, Osteria Francescana, Modena

We use a lot of fish oils, kelps and mushrooms in our burgers. For me, umami is what makes burgers crave-worthy.
Adam Fleischman, owner, Umami Burger

For a broth, such as the lamb broth we serve at Dinner, we use a high content of button mushrooms, shiitake mushrooms, a little bonito, rosemary and tarragon, and then season with white soy sauce and sherry vinegar for acidity and balance.
Ashley Palmer-Watts, executive chef, Dinner by Heston Blumenthal

And finally, finally a great Kimchi recipe (reproduced from The Caterer) from “Hawksmoor At Home“:

Remove the outer leaves from the cabbage, cut it in half lengthwise, then cut the halves across into 2cm wide pieces.

Toss the cabbage in a bowl with the Maldon sea salt and 15g of the sugar. Cover and leave overnight in the fridge.

Put the garlic, ginger, Korean chilli powder, anchovies, soy sauce, shrimp and the remaining sugar in a blender with 50ml water. Whizz the mixture to a smooth paste, then stir in the spring onions and carrots.

Rinse the cabbage thoroughly in cold water, drain well, and combine with the paste.