We’re slackers in the pork consumption stakes; rather better at pig welfare though.

And I’m not encouraging you all to yet more gluttonous excesses in an attempt to prove our post-Brexit country-hood prowess, by upping our consumption game and out-eating those perfidious EU types, let alone taking on the Chinese menace. Nope. 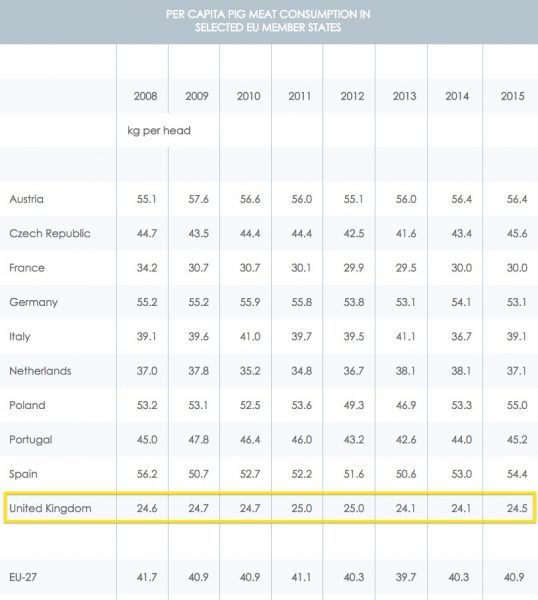 That’s us there — highlighted in yellow — at the bottom of the EU league table. And compared to the Chinese? Wow. Real lightweights.

Eating nearly three times as much as us (and with a population 25x bigger), that’s a shedload of pigs being farmed. However, we can be justly proud of the welfare standards here in the UK (driven by the EU legislation) — let’s ignore the damage that Brexit may do to these for the moment — and instead, be rather heartened by the news (flagged up by the always excellent Butchr.net) that EU animal welfare standards are to be adopted in China.

The Open Philanthropy Project, a US based organisation, has awarded the RSPCA a two year grant to conduct their research and work and get a comprehensive set of standards in place for the Chinese farming industry to follow.

Whilst this is going to take some time to come to fruition — it’s a big, BIG country after all, it’s hugely encouraging and a great start in terms of global animal welfare; can we do the same for those quite frankly disgusting factories (they don’t call them farms as they’re then not caught by welfare legislation) in the States do you think?

And finally, a related Grauniad piece today on efforts to reduce our meat eating habits and help save the planet. A suggestion that we tax meat. Not as far-fetched as it may sound at first.

Proponents of industrial farming would no doubt regard this as special pleading, and come up with figures purporting to show that the environmental performance of small farms is no better than that of large ones. However, small farms and local food economies provide social benefits because they keep consumers in touch with the source of their food, whereas rows of polystyrene trays in supermarkets manifestly do not. Consumers will understand better why meat needs to be expensive when they can engage with its production and the people who produce it.