Who doesn’t love a man in armour?

I don’t want to become a butcher but I do want to know the provenance of the meat I use to cook with, exactly where on the animal it comes from and the best way to handle it with respect for the animal. I won’t be buying a side of beef anytime soon (have you any idea how much a side costs?), nor, having seen the amount of work & skill that goes into it, would I be butchering one anytime soon, even if I did buy one.

Evolving to the butcher

Dressed in a fetching apron, an equally fetching (and surprisingly light) set of chain-mail & with my left hand (the “gripping” hand maybe, for those fans of Larry Niven’s Moties) also clad in a protective metal glove, I was ready for action.

I had more than three hours ahead of me, training (and sweating) with the hugely skilled, patient & helpful Adrian, master butcher at Franklins Farm, who was there to make sure I didn’t damage myself, the two other neophytes also being shown a few knife skills or, most importantly, the meat that we were to work on.

In that he mainly succeeded; and I even managed to make a reasonable fist of boning out, butchering & presenting some lamb during the first couple of hours. 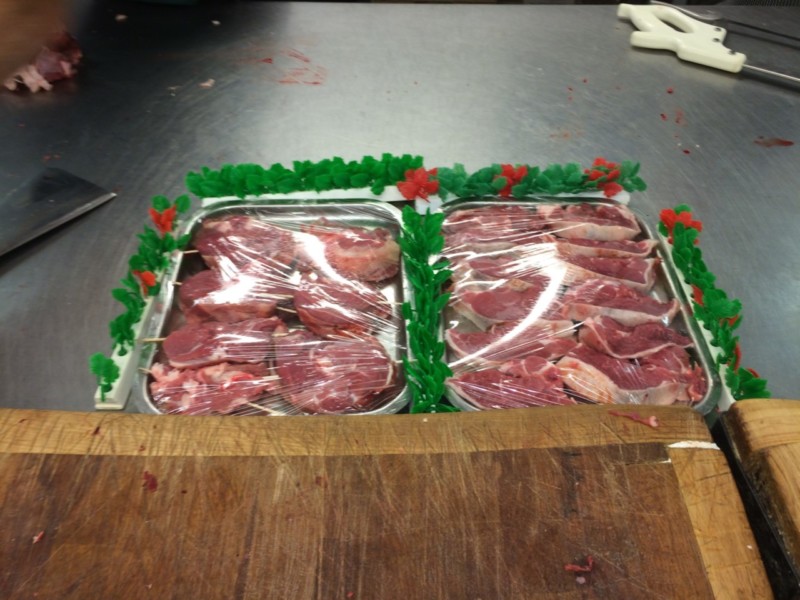 What you don’t see in these pictures is the amount of sweat that I lost, the sheer jaw-dropping amazement that anyone could, almost sight unseen, work out where these bones went and thus where to stick and (more importantly) where not to stick the knife and the effortless skill shown by Adrian when removing meat from bone — he doesn’t cut, he glides behind the meat, along the bone, pushes it aside, so that the meat almost just drops away.

I’m not quite there yet. But keeping the knife point (for it’s really only the point that you need to use when boning) sharp, sharp, SHARP is key. Adrian would sharpen it after almost every occasion he cut, a couple of quick, almost casual swipes at the steel sufficing. He doesn’t push his knife into the meat, a gentle caress and it falls apart, skin (and bone) being no barrier. I soon found that a knife anything less than scalpel-sharp meant a world of pain & frustration when trying to use it to cut.

Next was a leg of pork. I’ve no photos of this work, being both hugely busy & hugely involved in watching what he did, where he cut, how he cut and being slightly more confident now, I wielded the saw, the knives with no little aplomb and eventually produced a piece of boned leg (trotter less of course), bare of skin, that, even though I say so myself, was actually not bad at all.

It actually turned into more than four hours of learning as we talked about beef and game and his 39 years in the profession. The cold-store, as well as being a great place to duck into to cool my raging brow when the heat at the cutting block got too much, also had some amazing sides and 35-day old hung joints of beef to gaze at, in mouth watering desire.

So, what did I learn? A huge amount about how meat hangs onto bones and where to cut most effectively and efficiently. A small number of little tips ‘n tricks that help speed up the butchering process and that I can use in the kitchen. Where some of the cuts of meat I buy actually come from on the beasts and what they look like before they’re laid out, wrapped and set on the counter to buy. The requirement to keep the knife sharp. And a huge respect for the art of butchery.

Oh, and most importantly, I can confidently & without fail, tie the essential butcher’s knot, without which, no joint of meat is finished.

I loved it; I hope to be going back again soon to do some work with beef which, I’m promised, will really make me sweat. I can’t recommend this course enough — if you get a chance to attend one, grab it. It’s fun, it’s exciting, it’s interesting. And you walk away with lots of great meat that you butchered yourself. What’s not to like?