Today I learned for the first time that there is a porcine equivalent of the chicken based yakitori in Japan. One called yakiton (やきとん).

This makes me a very happy man. I mean, I love to eat a well cooked piece of chicken as much as the next person. But pork? I bloody adore pig in any form on my plate.

They’re also known as “butakushi” or “buta no kushiyaki” and the astute amongst you — which to be honest has to be all of you, lovely people — will already have clocked the use of the word “buta” (豚), the Japanese for “pig”, as in my beloved Kagoshima Kurobuta or “The Black Pig of Kurobuta” AKA The Berkshire.

Right, the language lesson over with, we can now concentrate again on the meat. Let’s start the story of yakiton. [Those of you of a certain age, from Britain, may get the reference to an old children’s TV show, alluded to in the title of this piece]

I’ve emphasised all the way through this blog — right from the very earliest days — how completely obscene I find the idea of wasting food (or the waste of pretty much anything in fact) and how we need to eat everything from the kill — the real tail to nose. And the Japanese, for very sound reasons, based on memories of times of starvation, are of the same “waste not, want not” mind-set. Thus both yakiton and yakitori, where a virtue has been made out of a necessity.

[There’s a book I read a few years back that gives a very different take on Japan, its history, its people and from which I wanted to quote about their almost visceral fear of starvation, most recently of course in the horrendous times after WWII, but I can’t for the life of me remember what it’s called — an ongoing problem at my age — and as I gave it away some time back, I’ll have to update this piece as and when I remember.]

Currently, I’m reading — and this I can recall —   “Chicken and charcoal” from Matt Abergel of the highly rated yakitori restaurant, “Yardbird”, in Hong Kong. They sing the praises of a particular type of Chinese bird, called a Three Yellow chicken. Yellow feathers, yellow mouth and yellow feet. Not a bad looking chook at all is it? 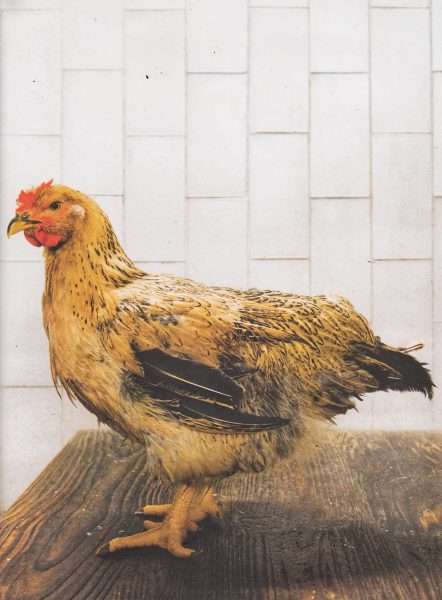 And, in some of the many stunning illustrations that make this book a real delight to look at, show the butchery stages needed to take one of these birds from this state… 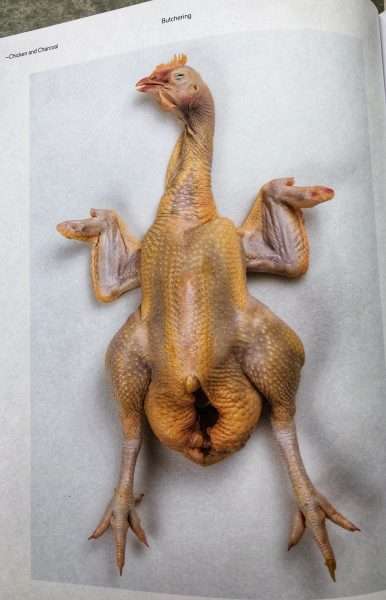 …to this, fully broken down set of body parts, which are then artfully skewered and cooked over charcoal… 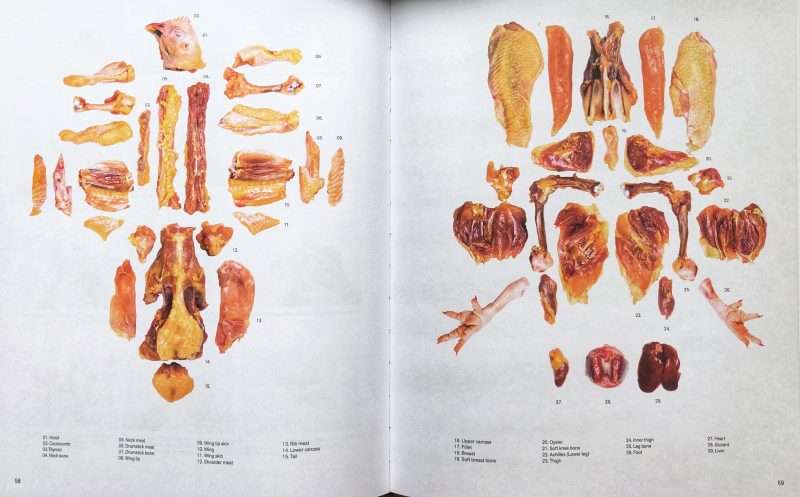 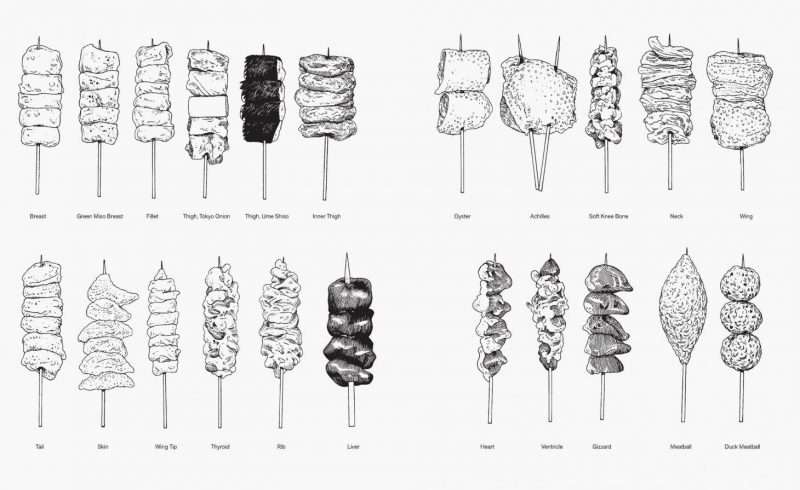 The very same processes and the care taken about the choice of ingredients, are part of yakiton preparation as well. This means that you’ll likely find yourself eating hearts, liver, pieces of diaphragm, spleen, intestine, a little tongue, some rectum, yes, even cartilage. And before you start grimacing and saying “that’s disgusting, I’d never eat rectum“, bear in mind that you probably have if you’ve ever eaten meat products from suppliers who use “mechanically recovered” methods in their meats.

And I would lay long odds that, unless you’re told in advance what the body-part is that is placed on the plate before you and that you’re already starting to bite into — with that wonderful smell wafting in your nose, the fat dripping over your fingers and the scent of the sauces making your mouth water — you won’t actually be able to tell. So, go with the flow and just enjoy the skills of the cooks producing this for you. By doing so, you honour the pig that died so that you can eat. And I’m pretty sure you’ll love whatever it is that they skewer and cook for you.

I accept that cartilage is a strange mouth-feel. It’s one that — along with mucilaginous masses or jelly-like textures and, often, more than the usual amount of bones being left in a dish — is very indicative of some forms of Asian cooking. So, you can choose not to order this particular piece of the pig and I won’t carp too loudly.

[There’s a lovely little Netflix series called Flavorful Origins based around the regional cooking and favourite dishes from the Chaoshan province in China. Some great micro-photography work accompanies a Chinese voiced (English sub-titles) description of 20 plates of food with some textures & flavours that could prove, er, challenging to some Western palates. Not that of Fuschia Dunlop for example, but quite a few of the rest of us. That said, it’s a brilliant series of pieces, well worth the 4 hours needed to watch them all.]

The pictures of the various yakiton dishes below, seen at the Gurnavi site are deliberately unlabelled by me. I defy you to tell me which is the rectum, which the belly and which the tongue, for example. 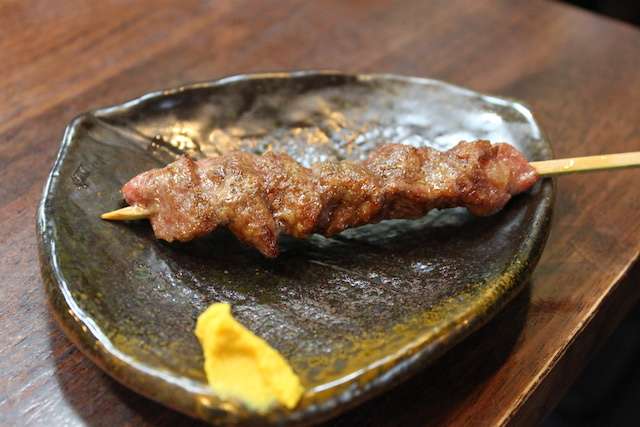 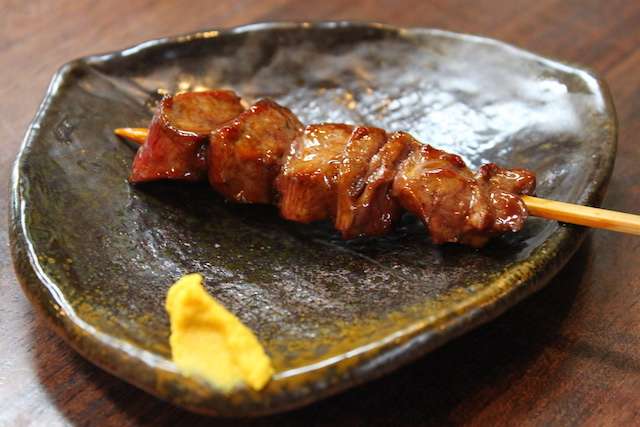 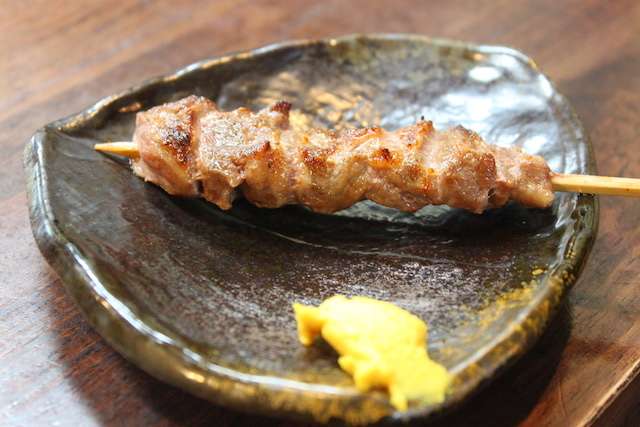 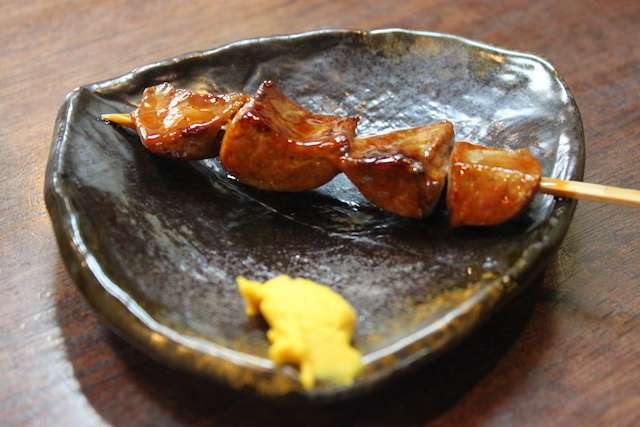 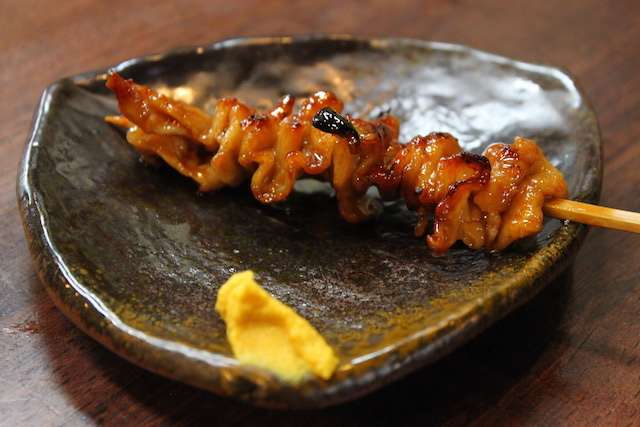 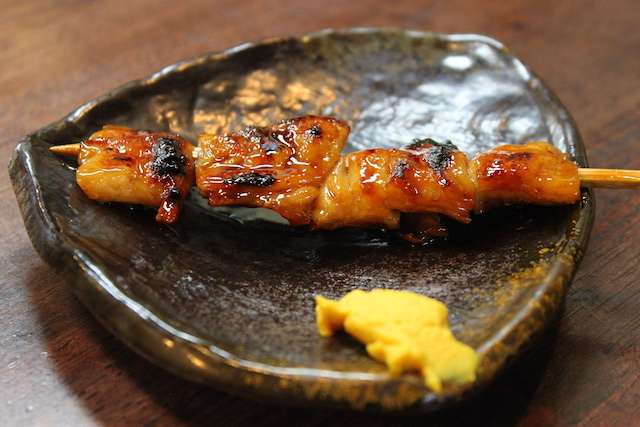 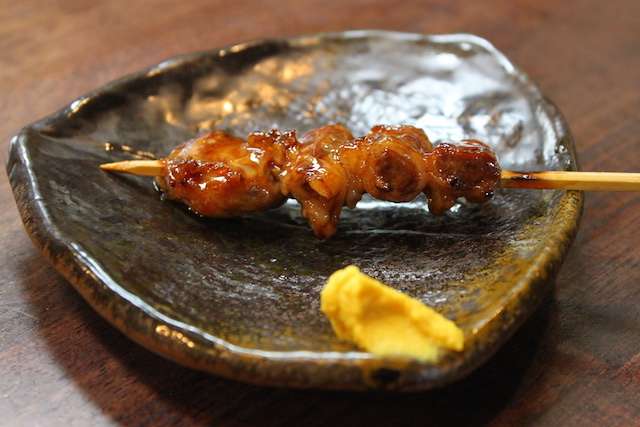 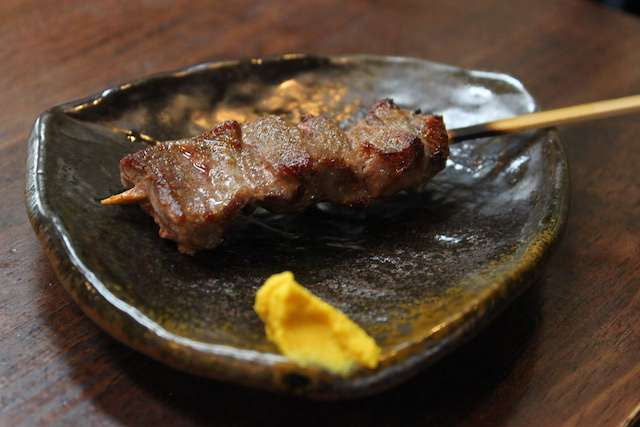 You can check out the labelled photos at this site where they do a great job of describing the various dishes. But don’t cheat. And — you have to admit — they all look bloody wonderful, don’t they?

When you eat yakiton, you generally get to choose whether you want yours’ basted in a sauce (tare) or, more simply, with just a quick sprinkling of salt (shio) before they’re placed onto the grill. They’re often accompanied by yuzu-kosho, a spicy, citrusy pepper paste or Shichimi togarashi, a chilli spice blend or just simply, some bright yellow Japanese mustard. And (nearly) always with some form of alcohol. At this one below, they offer a drink made of frozen Shochu with soda & fresh lemon juice, called nama lemon sour. 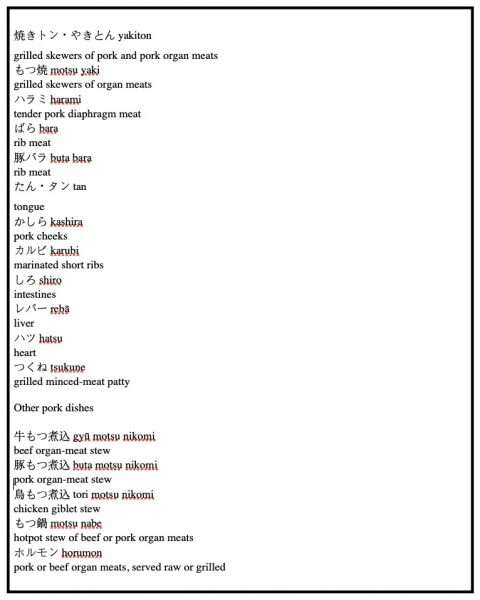 This little video of two food bloggers filming in what’s widely seen as one of the best yakiton in the country, Saitamaya Yakiton in the Jūjō area of Tokyo gives a good idea of how they look.

And if you’re in the area, the restaurant can be found here… 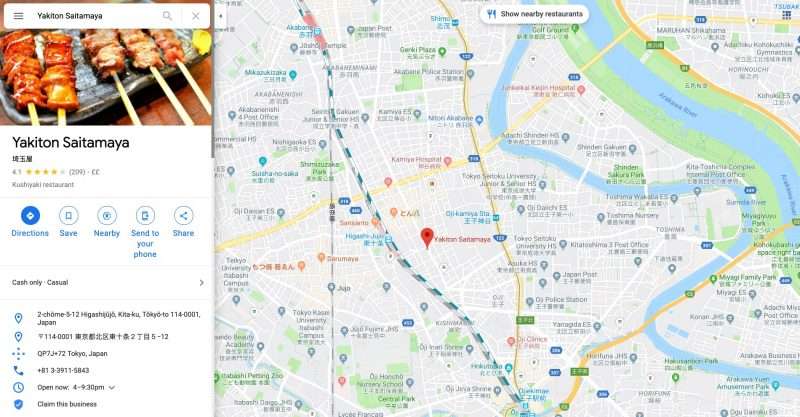 Or there’s the chance to eat whole pieces of leaf lard, delicately crisped or the “gooey and delicious” pig brains at this Hong Kong based “Mokumoku” restaurant. 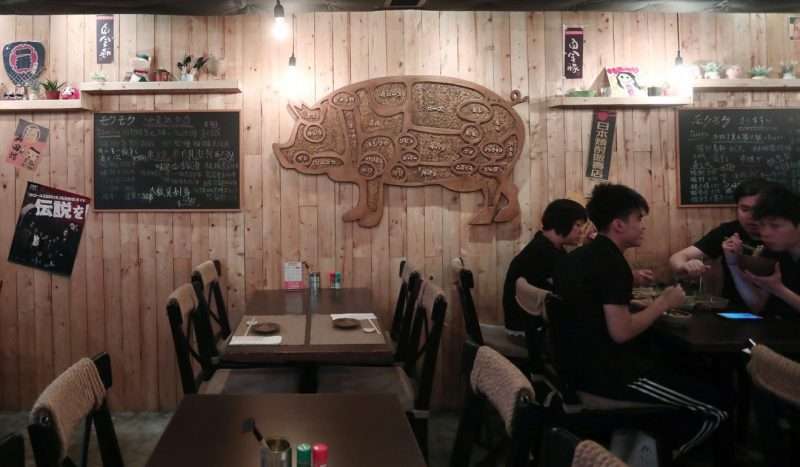 The places to eat yakiton in, run over the entire gamut, from late night street vendors to hole-in-the-wall, to ones offering an almost kaiseki, tasting menu approach. They ‘re hugely popular with the Japanese esp. after, or with, alcohol (who knew?). We’re back to Japan in 2021; I for one can’t wait to inhale as many of these as is humanly possible.

And finally? Talking of leaf lard earlier in this piece, reminded me that we’d recently come across mention of “leaf scratchings” a regional delicacy from England and now available from the Coopers Family Butchers in Darlaston, in the West Midlands. Unlike ‘normal’ pork scratchings — also, like yakiton, often eaten when in the immediate proximity of copious amounts of alcohol — these were once chipped off a large block at the butchers, one that came about as a by-product of the lard producing industry. “Leaf” lard (made from the tissue around the kidneys) is simply the best and when the “leaf” is heated to clarify it, left behind are the tissues and small bits of meat. Apparently, these were then compressed into a block, using a sort of ‘cider making’, screw-press device and then baked. The process results in scratchings that are ‘flaky’ rather than the usual crispy types, are intensely ‘porky’ flavoured; reminiscent of Ibérico. Buy some. Buy some beers. Eat. Relax. Enjoy! 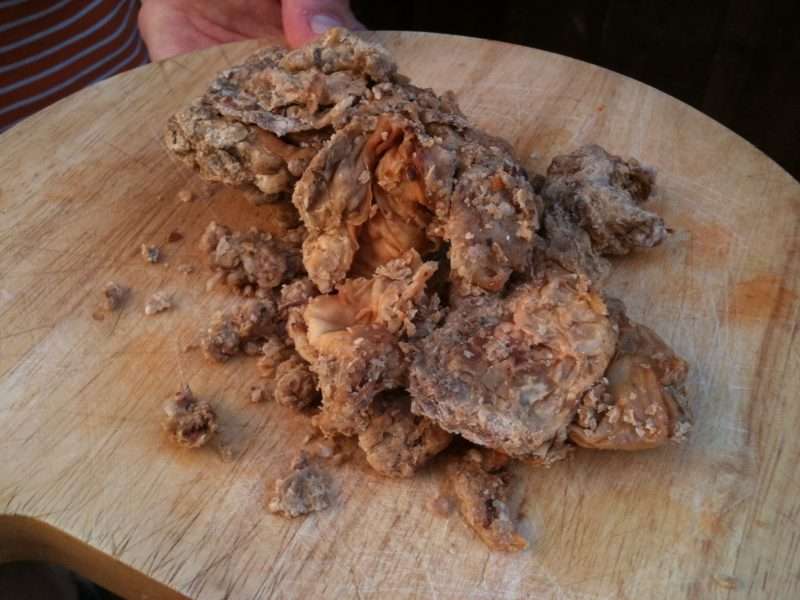