Some “Plum Pudding” for Christmas anyone?

Reckoned to have been around for over 200 and possibly up to 300 years, at least as a recognisable variant, the Oxford Sandy And Black wasn’t however recognised as a breed by the Rare Breeds Survival Trust (who themselves after all were only formed in 1973) as until 1985, they had no Society or herd book to look after its wellbeing. That position changed after that year and as a “native breed”, it’s now currently flagged by the RBST as a “Minority”. 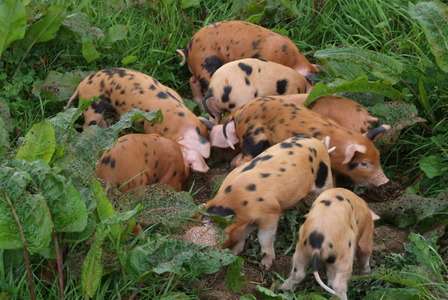 No doubt kept originally as the traditional pannage pig, then as a small-holders (and small farmer) and cottage pig of choice, because of its easy-going nature, not surprisingly in view of the name, it was particularly prevalent in Oxfordshire but also across a wide swathe of the middle of the country. Nicknamed both the “Plum Pudding” and “The Oxford Forest” pig.

Links have been claimed ‘twixt it and the result of possible crosses between the Old Berkshire and Tamworth breeds (both of their colourations offering a logical antecedent I suppose) but there seems to be little extra detail or research on this, with all sites merely repeating much the same wording and cross-referencing each other…1

As always, the caveats already talked of by Wiseman (op. cit)2 should be noted. He makes no reference to the OS&B as a breed and the colours (and spots) are common across almost the entire country. I hate to rain on any breeds parade but it’s apparent that most colours, body shapes, hair types, even profiles were until comparatively recently a matter of indifference to anyone — yield, quick growth and especially ease of keeping and grazing being far more important to a poor peasant or farmer.

That said, the breeds are now fixed and the OS&B sits firmly in that “rare breed” pantheon.

Teetering on the verge of extinction more than once, even as long ago as the 1940s, boar licensing had dropped to just one or two a year. That decline continued, held off by the work undertaken by a small group dedicated breeders, until the current Breed Society was formed following contact made with all then known breeders of the OS&B by the Society’s founder secretary, Steven Kimmins, supported and helped by Chairman Andrew J. Sheppy & President Geoffrey Cloke. Had it not been for this work, it’s probable that the OS&B variant would have disappeared and never become the recognised breed that it is now.

Some of these bloodlines have since been lost, but today’s equally dedicated and enthusiastic breeders are working hard to maintain and grow the remaining lines. Breed numbers have been slowly increasing over the last decade and the rarest bloodlines have been preserved. There are now 4 male and 13 female bloodlines known within the breed and currently 14 boars recorded. The bloodline names: Boars: Alexander, Alistair, Clarence, Jack Sows: Alison, Clare, Clarissa, Cynthia, Dandy, Duchess, Elsie, Gertrude, Gloria, Iris, Lady, Mary & Sybil

Although still relatively few in number (thus the “minority” grouping on the RBST site), recognition by, and the transfer of herd book management to, the BPA from the Oxford Sandy and Black Society has already brought increased publicity (their colouration makes them a recognisable favourite) and gives them the opportunity to compete in the “shop window” that are the BPA recognised shows. It’s now mainly to be found in the coastal courhern counties of England although there have been a few recent exports to Northern Ireland.

I don’t think there’s any current pig breed that doesn’t claim exactly the same distinguishing qualities but the OS&B is to be noted for “its excellent temperament and mothering abilities”. Prolific and hardy, it is particularly suited to outdoor systems, being good foragers (again, show me a pig that ISN’T a good forager?) and as they are a coloured pig with a good coat they are far less prone to the sunburn that afflicts the plain, smoother pink breeds.

Breed requirements: The ground colour should be a light sandy to rust with random black blotches (not spots) with a white blaze, feet and tassel.

A medium to large pig with good length and a deep body, good quarters and fine shoulders, strong legs and feet and well set on, giving a free and active gait.

Finally, I’m taking this post as the opportunity to describe how pigs should be marked and I’m grateful to the Oxford Sandy & Black Pig Society site for this detail:

It is acceptable to double tag pigs (i.e. both ears) with Identical tags in the format below – HOWEVER Breeders should be aware that if double tagging is selected for pedigree identification that the BPA show committee will not currently allow pigs so marked to be entered into BPA shows. This may well reduce the saleability of your stock and should your pig shed both of its ear tags then you may have great difficulty re-establishing it’s pedigree bona fides.

DEFRA also require all pigs over 1 year old (or going to a show or market) to be tagged with the appropriate herdmark.

Breeders are recommended to use the following ear tag format as it satisfies both the requirements for pedigree identification and DEFRA.

And a visual guide to ear notching.

How the ear notches tell you the age 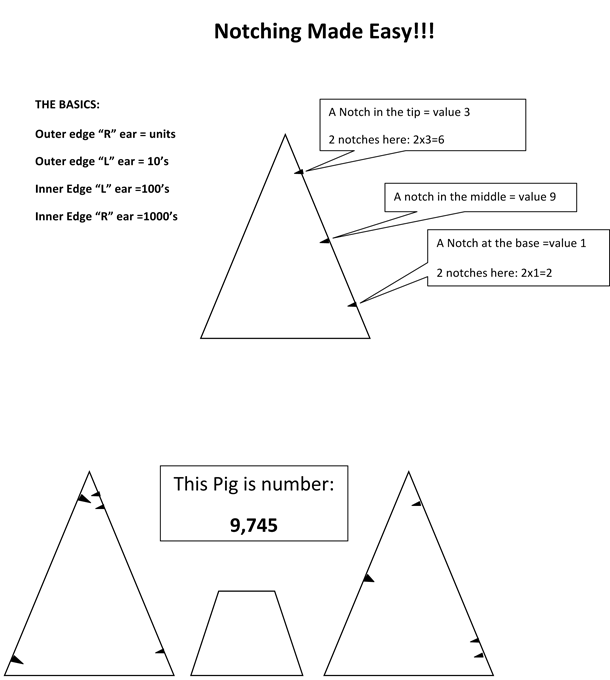 [1] Noted identically on both the British Pig Society site and that of Oklahoma State University for example.