Our Pigs Do Rock – the American Duroc dude

Hailing from the other side of the Atlantic, know by some as “the Black Angus of pork” (similar to the “Kobe beef of pork” accolade given to the Mangalitsa), the modern Duroc pigs are the end result of more than 150 years of breeding and crossbreeding between various indigenous strains of (mainly) red swine. The US National Swine Registry records that modern Durocs were first bred in the 1800s, when farmers started to cross New York Red Duroc pigs with Jersey Red pigs.

The exact early lineage isn’t know with any certainty. One source of the red or reddish-brown hogs found in the United States was reputed to be those that came from the Guinea coast of Africa, and it is said that hogs similar to those found on the Guinea coast were found in every country to which early slave trading vessels found their way. In The Story of Durocs⁴ it is stated that red hogs were brought to America by Columbus on his second voyage, and red hogs were also brought to this country by DeSoto. These were presumed to have come from Spain and Portugal, and red hogs were sent from Portugal to Nova Scotia. In The Breeds of Livestock⁵, Sanders is of the opinion that reddish-brown hogs of the Berkshirestrain were brought to the United States and probably found their way into the Duroc breed.  In 1837 Henry Clay imported four red shoats from Spain for his farm at Ashland, Kentucky. Daniel Webster imported similar hogs from Spain or Portugal in 1852 for his farm in Massachusetts, but Mr. Webster died soon afterward, and the hogs passed to the ownership of his relatives and were scattered into several states.³

The strain that later became known as the Jersey Reds was already well established in New Jersey prior to 1850. Clark Pettit, a noted early breeder of red hogs in that state, suggested that the red hogs found in New Jersey came from an importation to the state in 1820 although others have suggested that the strain was found there at even an earlier date. These hogs were referred to merely as “red hogs” for some years gaining an enviable reputation because of their extreme size, rugged constitutions, and prolificacy.

Still, they were considered to be lacking in quality, being “very coarse in the hair coat and bone, and long and rangy”. At maturity, they’d reach an enormous size and were favorably accepted at the near-by markets. The name Jersey Reds was first attached to these hogs by a Joseph B. Lyman, (Agricultural Editor of the New York Tribune), who lived in New Jersey. Shortly after he had coined the name, a Mr. Lippincott started to use it whilst advertising his hogs, and from that time on the name “Jersey Red” was here to stay.

In 1823, a red boar from a litter of ten (whose parents were possibly imported from England), was obtained by an Isaac Frink of Milton in Saratoga County, NY who saw them whilst visiting Harry Kelsey to view his famous trotting stallion, “Duroc”, and Frink named his red boar in honor of the horse, the first time it had borne a breed name.

His progeny as well as taking the name, also inherited his colour, quick growth and early maturity, deep body, broad hams and shoulder and quiet disposition. The Duroc was smaller than the Jersey Red, with finer bones and better carcass quality. From the mid-late 1800s onwards, this systematic blending produced a moderate hog, well suited for the finishing abilities of the average Cornbelt farmer.

At the Chicago World Fair of 1893, Durocs gained immediate and wide-spread popularity 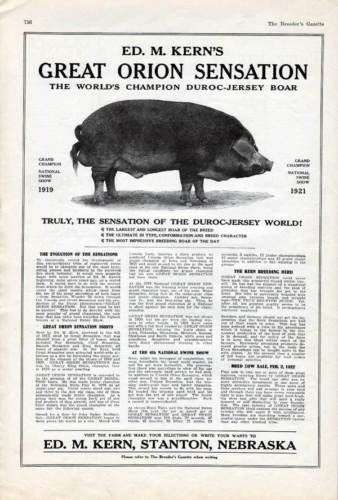 at their first successful Duroc breed show. And, since the 1860s, Durocs have been bred and cultivated for their triumvirate qualities of a red coloring, economic size and excellent meat.

They’re also one of the fastest growing breeds of pig as well as hardy and are favoured by farmers who more and more choose to keep their stock outside. Their thick auburn winter coat and hard skin allows them to survive the cold and wet of the British winter. This coat moults out in summer to leave the pig looking almost bald, but as a consequence it can cope equally well with hot dry summers.

The Duroc made two attempts to gain a foothold in this country; the first in the early 70s was not very successful, although some of those pigs were exported on to Denmark². They were then re-imported in the early 80s and a comprehensive trial was undertaken by the MLC to assess the merits of the Duroc as a terminal sire. It was found that in the British skin-on fresh pork market, the Duroc could not be used as a purebred but only as a component of a crossbred boar. The continued development of Duroc crossbred boars produced large numbers of crossbred gilts and a healthy market was found for these after a resurgence of interest in outdoor pig production. This has resulted in breeding and selection programmes for the British Duroc focusing on female line characteristics rather than the traditional terminal sire traits associated with the breed. This practice has ensured that the Duroc has its own niche in the British industry as well as becoming a uniquely British version.¹

Known for producing large litters, especially when crossing Duroc boars with non-Duroc sows, they obviously became popular for crossbreeding and for the improvement of other breeds. The Duroc sows (indeed, like most of the modern breeds) are also noted for taking very good care of their young.

Duroc hogs are sometimes deemed to be aggressive but this can be minimized if attention is paid to the temperaments of the animals and they’re properly socialised. Pigs are herd and family animals and the Duroc is no exception — it’s best (and a kindness) raised in group surroundings. 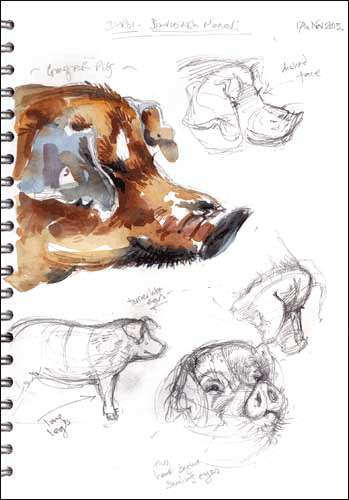 ² An ironic about-turn really, as the “threat” from Danish pork had been the main reason for the reduction in the number of unique English breeds recommended by Howitt in the 1950s.

⁴ Robert J Evans, “A Short History Of The Duroc Jersey Breed Of Swine“, Library of The University of California.

⁵ The “Breeds of Livestock“ J.H. Sanders, Chicago, IL, 1887, from The Library of Congress