The British Saddleback; “fatting fast while other pigs’ ribs are staring through their skins”

So described, in his 1855 novel Westward Ho!, by Charles Kingsley is the British Saddleback.

Created around 1967 by crossing the Wessex and Essex Saddleback breeds as, amongst other reasons, it was felt that this cross was a way of preserving the best of both breeds; rare breeds that were by now, falling rapidly out of favour, for reasons already discussed in other histories on this site and elsewhere. 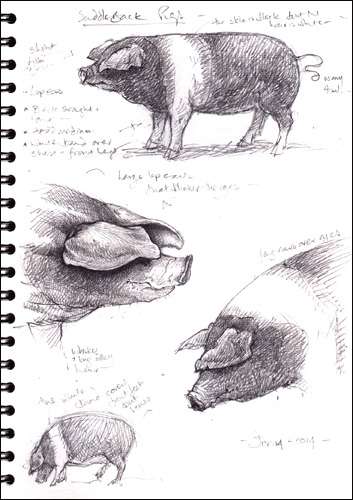 The resultant progeny had good hybrid vigour making a hardy and fast growing pig. The pig is large with a straight underline and at least 12 teats. The ears are medium length and incline forward over the face that is only slightly dished¹ and those same ears make keeping them behind a fence an easy task, as they obscure their vision and thus willingness to explore strange, exotic new locations…

Their early story goes that a Lord Western, travelling in Italy, saw some Neapolitan pigs and concluded that they were just what he needed to improve the breed quality of the Essex pigs on his estates. He obtained a pair of Neapolitans and, on his return, crossed them with Essex sows. One of his tenants, a Fisher Hobbs of Boxted Lodge, then (I’d imagine as quietly as is possible where pig coitus is involved) availed himself of the “opportunity” to use these hybrid Neapolitan-Essex boars belonging to Lord Western and crossed them in turn with his coarse Essex sows and thus established the Improved Essex.

Sidney in his last edition of Youatt on the Pig, says “The improved Essex probably date their national reputation from the second show of the Royal Agricultural Society, held at Cambridge, in 1840, when a boar and sow, both bred by Mr Hobbs, each obtained first prizes in their respective classes.” Kingsley describes one character as a “Fisher Hobbs’ pig”, and adds:

…and if you do not know, reader, what a Fisher Hobbs is, you know nothing about pigs, and deserve no bacon for breakfast.

The Essex pig was mainly found in East Anglia. It had a black head and neck, as well as a clearly defined belt of white (the “saddle”), extending over the shoulders and continuing over the forelegs. The rest of the body was black with the exception of white feet and the tip of the tail.

The Wessex originated in the New Forest as a cross between two indigenous old English bacon pigs. By 1914 the breed was also found in the South and South West. It was black all over, aside from a continuous belt of white hair over the forelegs and shoulder. W. J. Walden, writing in the 1931 National Pig Breeders Gazette, explains that stringent rules were put in place by the Wessex Saddleback Pig Society at its foundation to prevent alien blood being brought in where the foundation on one side was not of New Forest origin. The breed prided itself on having resisted the trend to introduce Chinese blood. In his article on Wessex Saddleback markings, Walden asks “Why then make a feature of the chief colouration marking? Surely it does not take a high intelligence to see the correctness and advantage of the one conspicuous trade mark when two China free breeds are brought together?”

The two breeds enjoyed great popularity during the Second World War when 47% of the total pedigree sow registrations were from the Essex and Wessex breed. In 1949 there were 2,435 Essex and Wessex boars licensed representing almost 25% of the licensed boars for that year. The sows retained some of their popularity in the post war years. In 1954 they made up 22% of the total registrations for that year. The boars, however, had lost considerable ground to white breeds and in the same year, less than 10% of the licensed boars were from the Essex and Wessex breeds.

The respective breed societies had amalgamated in 1918 and the herd books finally followed suit in 1967 when the British Saddleback breed was established.

This is a useful table showing the decline, even as early as 1954, of the various traditional breeds and the, by then, predominance of the “generic” Large White.

² Charles Kingsley’s novel is fully titled “Westward Ho! Or The Voyages and Adventures of Sir Amyas Leigh, Knight of Burrough, in the County of Devon, in the reign of Her Most Glorious Majesty, Queen Elizabeth, Rendered into Modern English by Charles Kingsley“, meant to reflect the mock-Elizabethan style of the novel.