The Croshaw throwback: the Essex Saddleback

Like many other of the old (and now sadly vanished British pig breeds), the early ancestors of the Essex would likely have originated in that county, arising from the slow, selective breeding of the generic, local wild pigs. It was originally described as a smallish, ‘coarse’ black-and-white pig that was noted for being easy to keep and cheap to feed; qualities that ensured its popularity with smallholders. The Old Essex, as it came to be known, was deliberately ‘improved’ in the mid 19th century by crossing it with imported pigs.[1] The pig; a British history

The Essex pig remained locally popular until as recently as the mid 1950s, having increased in numbers during World War II and immediately afterwards, based on its reputation for hardiness and its ability to feed itself by foraging.[2] In 1954, 488 Essex boars (2% of the total British stock) were still licensed, and 3,716 sows registered.[2]

The position of the Essex breed changed markedly after the publication of the Howitt report as discussed elsewhere[3] and as a result the numbers of Essex pig went into steep decline. 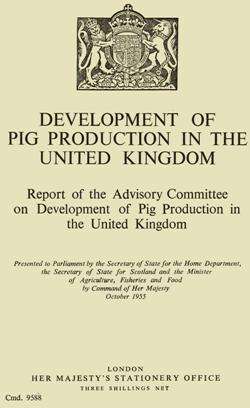 While the breed societies of the Wessex (another breed featuring a black ground colour and white shoulder markings, although with a different origin) and Essex pigs had amalgamated as early as 1918, the formal end of the Essex pig came in 1967, when the stud books were also amalgamated with the intention of merging the two breeds into the British Saddleback. This was intended to improve the breed’s characteristics, produce hybrid vigour, and obviate as far as possible, inbreeding in the remaining small herds. For many years the Essex pig was considered to have become extinct in 1967, although it was thought a few pure-bred individuals might have survived on small farms.

Later research showed that one farmer, John Croshaw, had refused to amalgamate his herd of Essex pigs (the “Glascote Herd”), which retained a pure Essex bloodline despite being officially registered as British Saddlebacks; Croshaw had carefully managed his stock to avoid inbreeding.[4] The Essex Pig Society was formed in 1997, and since that time Jimmy Doherty and Michaela Furney of Jimmy’s Farm have made further efforts to publicise and re-establish the breed.

²a b The Decline of Traditional Breeds, British Pig Association