Having written about the Irish Greyhound pig, I thought I should mention the grice, another extinct breed of swine found in the Highlands and Islands as well as in Ireland. It lasted longest in the Shetland Isles, distant as they are from the nearest sources of ‘improving’ stock, where it was still being mentioned until the 1870s. Known also as the Highland, Hebridean or Irish pig, it sounds very like the rest of that eras’ scrawny, unimproved, “take us as you find us”, types.

The word Grice comes from Scots and northern English dialect, originally meaning “young pig”, which is congruent both with the Nordic gris, and the French grice, meaning “pig”.

As well as the name for this type of pig, it may also have been occupational name for its keeper, the swineherd. The translation is similar in both Middle French, Old French and even Icelandic, so one could easily posit a link via Normandy in France, back to Norseman who raided the along the European coastline as Vikings.

There’s a fascinating audio description here of the Shetland pig, recorded in the 1970s of a man called Tom Tulloch from Gutcher.

A recent (and pretty data poor reconstruction) suggests it looked like this. Which of course, it very likely did as this is how the vast majority of pigs/boars from that period started out… 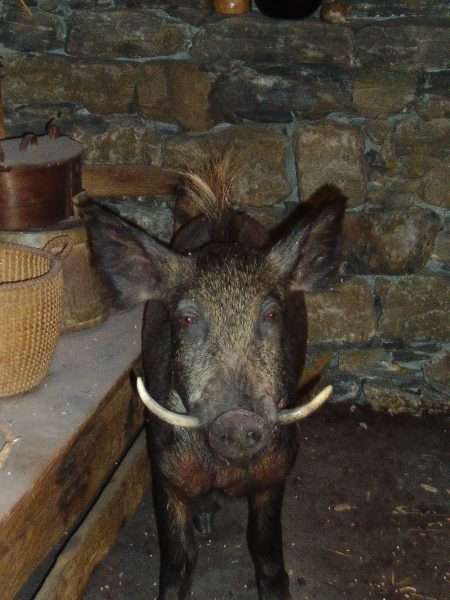 The 19th Century writings suggest that it was a small, hardy and aggressive animal with small tusks, an arched back, and a coat of stiff dark bristles over a wiry woollen fleece. Highland examples were described as “a small, thin-formed animal, with bristles standing up from nose to tail…” where they foraged for berries on the moorland. The bristles could be used as thread for sewing leather and for making ropes.

According to geologist Samuel Hibbert — who wrote an account of the islands in 1822 — although the grice was “small and scrawny”, its meat made “excellent hams” when cured. Islanders also made footballs from grice bladder, and even windowpanes from their intestines, by stretching the membrane over a wooden frame until it was sufficiently thin to allow light to pass through.

Most Shetland crofts would, of survival necessity, have at least one of them kept on their pretty barren grazing lands, but they’d often escape, roaming across adjacent farmland, rooting up any crops, killing and eating newborn lambs and — reportedly — even eating human babies. Despite that possible downside to the long-term health of the younger members of the family, they were over-wintered by the humans in their little crofts, letting them out once the weather turned a little more clement. Useful as a dietary addition as the animals were to the church-mouse poor crofters, from the sound of things, the neighbours would have been constantly on their case about this rather anti-social behaviour, so the courts were empowered to confiscate any particularly troublesome ones and to impose “hefty fines” on their owners.

In the 19th century, landowners further discouraged the keeping of them and one agricultural writer commented

“it is voracious in the extreme, and excessively difficult to confine in pasture or to fatten: it is also destructive and mischievous, and therefore ought gradually to be extirpated”

This, combined with the increasing import of other more ‘malleable’ breeds (if such a word can ever be applied to pigs) from the mainland, resulted in a dwindling population, and sometime between the middle of the 19th century and as late as the 1920s/1930s, the breed went extinct. One legacy of the grice remains:  a wild bulb, vernal squill, is known locally as “grice’s onions” because it was a favourite food of the breed.

The news that in August 2020, a skull had been dig out that just may be that of a grice excited some Shetlanders. But then, have you been there (sorry Scottish friends)? 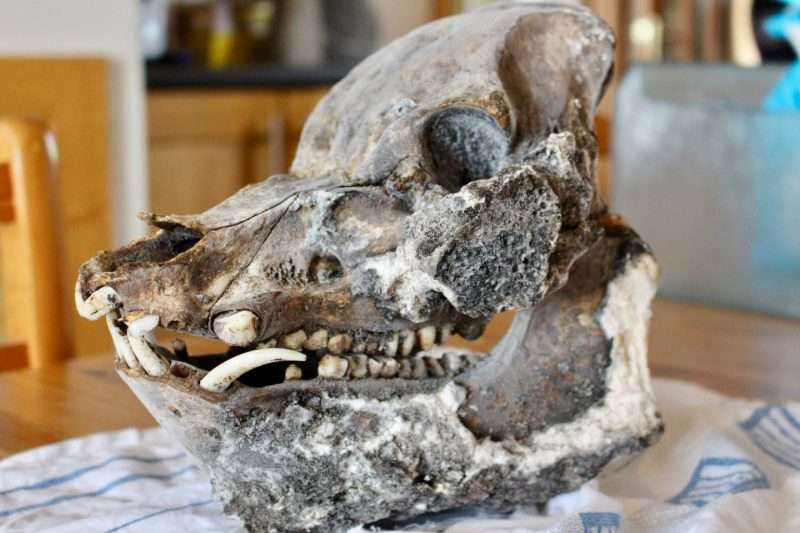