Which one do you want then? That white one, over there, in the middle…

Let’s start the story first though with the now extinct Cumberland; another old breed that likely developed over the course of several hundred years in (not surprisingly eh?) Cumberland and Westmorland. Closely related to the Old Yorkshire white pig it was a heavy-set animal with pendulous ears and a tough constitution, enabling it to withstand the notoriously inclement weather in Northern England. During the early 19th Century, all across the country, the growing recognition that breeds could be improved by a more scientific approach to selective mating meant much cross-fertilisation (deliberate and less “formally”) between farms and areas and the Cumberland was often crossed with the existing Yorkshire white breeds; eventually developing into the Large White and Small White breeds.

The story goes that the Middle White was first recognised as a distinct breed at the Keighley Agricultural Show, West Yorkshire, in the year 1852. We’re told that Joseph Tuley, a weaver by trade, was exhibiting several of his Large White sows along with other pigs but there was a dispute regarding their actual poundage. The judges apparently not able to agree on awarding the prized rosettes — as some of the animals weren’t considered sufficiently large for that class — but going on to say that “as the merits of these pigs were so extraordinary, entirely forbidding recourse to disqualification, a committee was summoned, whereupon the judges declaring that, if removed from the Large White class, the pigs would not be eligible for the Small White class”, it was (likely for very pragmatic reasons) decided to initiate a new, third class and to call it (slightly unimaginatively in my view but…) the “Middle Breed”. Thus, the Middle White came into existence miraculously fully formed, almost as though conjured from thin air.

You see, like a lot of the rare breeds discussed on this blog, it shows that the whole idea of distinct breeds becomes a rather hazy one to research or prove. Especially when it’s remembered that the Small White had been developed specifically for showing and was a cross derived (as elsewhere) from whatever rather motley local pigs were to hand, in turn bred with some of the imported Chinese and Siamese pigs, giving it the now characteristic dished face along with the distinctive pricked ears, both judged upon as part of the showing guidelines.

But breeds were becoming valuable in themselves, so in a further effort to establish this new one, Tuley apparently took a second cross with a Small White boar and females from the best specimens of Large White in his herd. The resulting progeny were as heavy as the pure Large White, “although in type and lightness of offal and head they much resembled the best of the Small White breed”. Like so many breeds before and since however, sadly this was one that later withered on the vine and the Small White as a breed was declared officially extinct in 1912.

Again, as has been seen in many of the now rare breeds, its great flavour, early maturing, giving small porkers in only around 16 weeks — always a good thing for a farmer to see when calculating projected feed costs — and its easy-going temperament meant initially that the Middle White flourished. Today, despite becoming popular with chefs, it’s listed as endangered by the Rare Breeds Survival Trust — there’s a note here that there are actually “more Giant Pandas in the world”.

The National Pig Breeders Association was founded in 1884 and the Middle White along with the Large White and Tamworth were the three foundation breeds and their first herd books were published in that year.

It remained a very popular type with butchers everywhere, but particularly so in London where the breed was known as “the London Porker”, as the carcasses could be cut into the small joints that came into favour in the first part of the 20th Century, partly I’d hazard a guess, as family sizes decreased.

The advent of the Second World War and the subsequent imposition of meat rationing, lasting until 1954 led, as we’ve seen in the history of other breeds, to a concentration on the “bacon” pig and this specialist pork pig was sidelined. Along with other pork breeds, the numbers of Middle Whites declined sharply during this period. Fortunately a number of dedicated breeders ensured the continuation of the breed and the Middle White Pig Breeders Club was established in 1990 (having as its patron, chef Antony Worrall Thompson, whose own enthusiasm for the breed has led him to breed a small herd) which has helped to stop the downward trend in numbers. 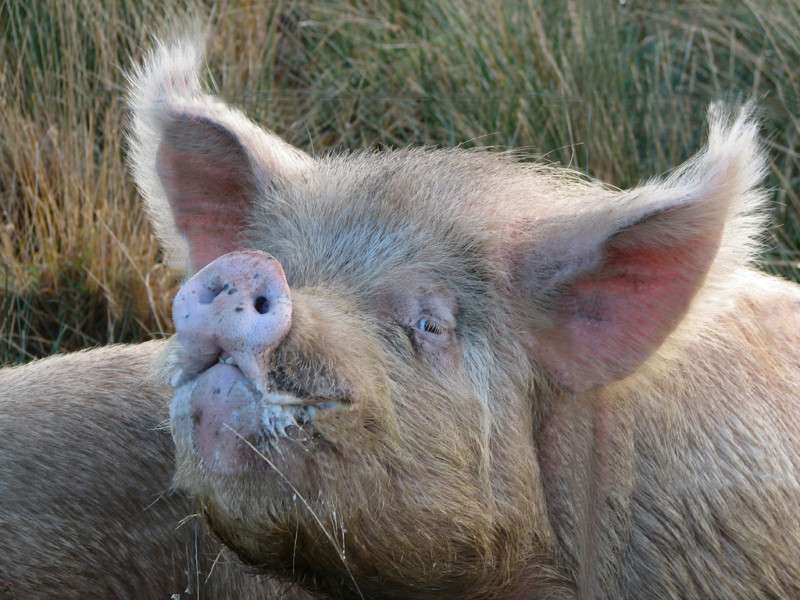 Sows weigh in around 200kg and boars around 280kg. It requires more shelter than some breeds and can struggle in extreme heat or extreme cold. The average litter size is around 9 piglets (2009 data) and the breed is known for having good maternal instincts and a gentle nature (although that phrase runs through most of the breed descriptions — one could hazard as guess that this is a characteristic that’s prized and looked our for). It “roots” less than some other breeds and is thus more suitable for certain outdoor systems and less likely to damage fencing. Middle White breeding stock has been exported world wide and the breed is particularly appreciated in Japan from the 1920s onwards, where they are known as “Middle Yorks”. There are also reports that it’s a favourite of the Emperor (“he would only eat pork from Middle Whites”) and that there is at least one shrine to the breed, highly prized as it is, located somewhere in Japan. I can’t find anything definitive to back up this assertion and all the references appear circular — the exact same phrase being repeated across many sites — so take this with the proverbial spoonful of NaCl.

As is obvious from this recent bloodline survey from the BPA, it’s characterised correctly as “endangered” 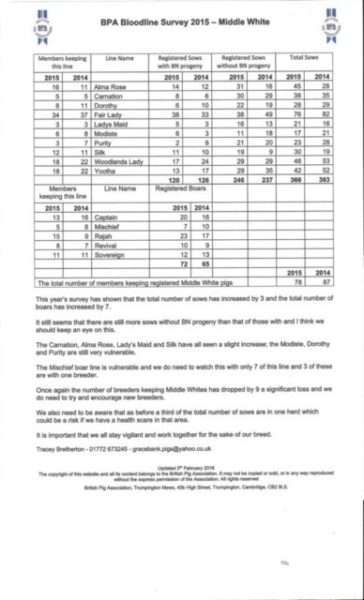 That said, if now the chefs and butchers are paying more attention to and asking for this animal (and the other rarest breeds) that’s A Very Good Thing™. None of the rare breeds lends themselves to factory farming — indeed that’s one of the main reasons why they fell out of favour as a mass-production approach to farming was encouraged by the government — but having them farmed in small groups by people that are passionate about them and their welfare & care hopefully allows for the slow but steady displacement of the “of course it’s cheap pork but don’t look too carefully at how we manage it” type sales, to ones geared more to an appreciation that this wholesale factory farming isn’t good for the people, the animals or the planet. It won’t happen overnight but with any luck, no more breeds will die out like the Cumberland did (or the old Lincolnshire Curly Coat for example)…