Health warning: This is likely to be quite a long post. So I may well stretch it out over a few separate ones, so as not to totally bore the pants off y’all.

And whilst there’s a lot about pork and cooking, it’s not all about this, so if you feel you absolutely have to, you could skip this one, I guess? Except, don’t. You’ll never know what delights you’ve missed if you do…

So, in a vaguely time-line order, some photos and some accompanying words on journeys made and plans executed and hatched over the past few days.

We’d earlier this year decided on a trip to the Alde Valley Spring Festival, at White Farm, Great Gramham in deepest, darkest rural Suffolk. Art, sustainable, ethical farming, local fish, fantastic food, pigs, knives. All in one little area, albeit one consisting of a maze of twisty, green passages.

Before leaving though, the last day of the cure for the latest batch of face bacon needed applying… 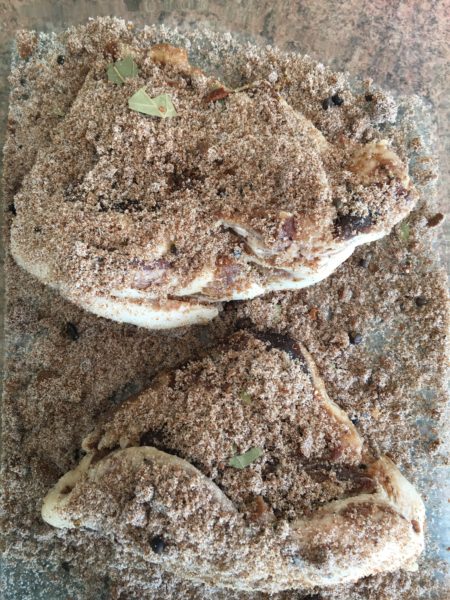 That task completed and the maturing bacon safely stored in the fridge, meant the drive to Framlingham could commence. Apart from a few ‘high’ spots — the Ugly Bungalow manages to tower a mighty 57m. above sea-level — most of Cambridgeshire sits a lot lower. Think flood-plains, reed beds, marshes, fens.

So travelling to Suffolk, where we started to see quite rolling verdant hills and valleys, almost brought on a nose-bleed as altitude fluctuated in a manner we’re no longer used to.

We’d booked into the Round House B&B there but check-in time wasn’t until 3pm, so we’d already agreed to drag our sad carcasses just 50m. or so further along the High Street to The Station Hotel, which until 1963, found itself sitting right at the end of the eponymous Framlingham branch line until it found itself being lopped off, like so many, by the ravages of Beeching*.

[* Let’s not mention him being appointed by and confidante of Ernest Marples, owner of a road construction company and, purely co-incidentally, also the Minister For Transport when the decision to move to (new) roads rather than rail was made…]

Now it has no train passenger traffic but does do some great food, is hugely popular, even on a Thursday lunchtime and is apparently Ed Sheehan’s local (“Who he?”, Ed.) when he comes to town to visit relatives. Luckily he wasn’t there, as he’s been known to sing. From the bar. Strumming his guitar. Right next to you. I’ve been up close & pretty personal with the awesome Dr. Feelgood in Lee Brilleaux days, with long, hot, sweaty nights at The Hope & Anchor — “Hiroshima in a pint pot” — which were magical. He, on the other hand, isn’t and bores me to tears. So, for that mercy, praise the $deity. 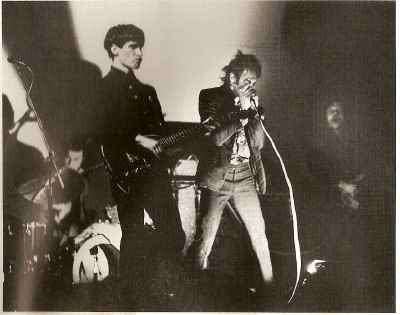 The pub’ evening menus looks fantastic and the old railway warning sign bottom left is a memory of other stations and companies, now long gone.

…but the lunchtime offerings were no slouches either. The chef happened to come out just after we arrived and told one of the customers “I cook a lot with cream. And butter. And more cream and butter”. Yup, my kinda cook.

Firstly, devilled kidneys on toast. Rich, unctuous (I’m really going off that foodie favourite word but it really does cover this plate), bright flavours with that almost metallic taste from the kidneys. 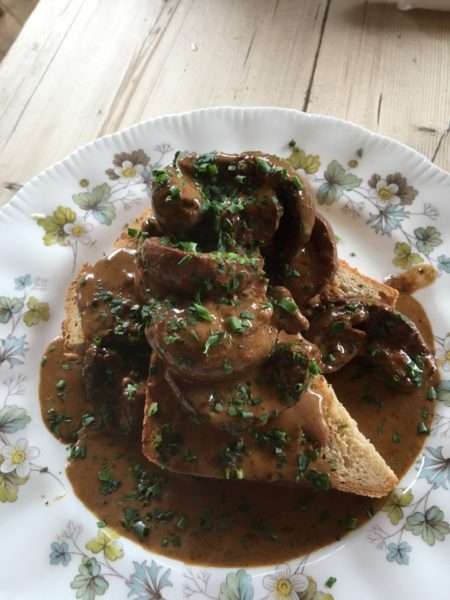 followed by veal & Parmesan meatballs in a pasta broth. Great seasoning, firm, tight texture on the meatballs, al dente pasta and a clear and brilliant broth. 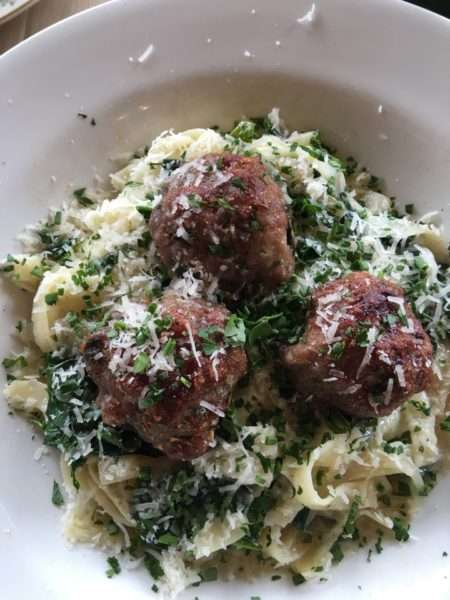 whilst Val made a good fist of forcing her way through the crayfish open sandwich. Not many polysyllabic words from her — “uhhhhhm” and “oooooooooh” predominated. 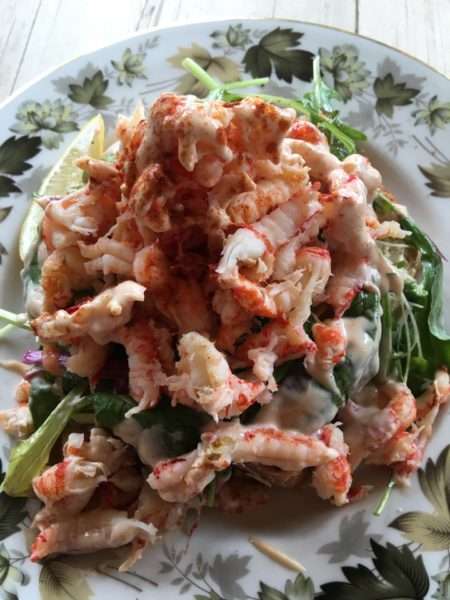 and an Earl Soham brewery mild. Not the mild that your maiden Aunt used to drink though. A really rather good beer. Complex, sparkling. A brewery find to explore next trip I think.

Next — to return to the blog theme — two, almost Scarfolk, logo images of pigs from their Facebook page 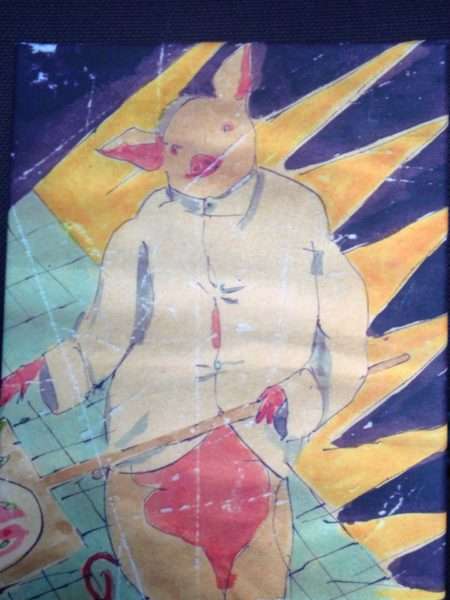 Deciding that we should try & work off some of this “light snack” poundage before the evening meal, we ambled through the town past the evocatively named Tomb House…

up to the castle, via the slightly cheesy town-square (think Ye Olde Worlde Greene Grocer and Supplier Of Hosiery To The Minor Gentry) then back down past the (what we later learned was) ducking pond…

finally winding up back at the Round House… 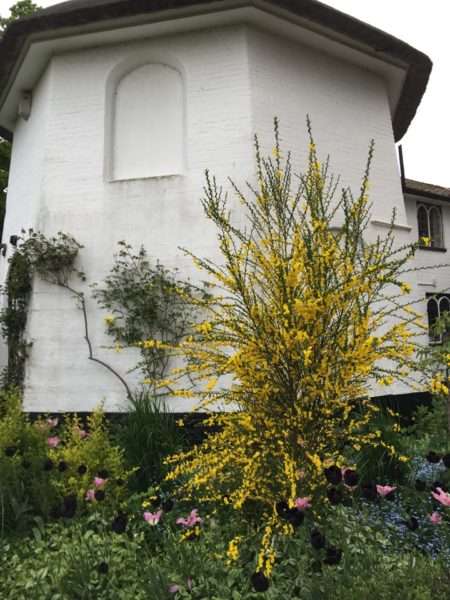 where we were staying with the rather wonderful Richard and Mark. If you find yourself in Framlingham (as you do), book there. Seriously, you won’t regret it for a minute. Powerful showers, non-vertical walls and windows, good conversation, fast wi-fi, an honour bar with good grape products, with deep comfy beds, pin drop quiet and a breakfast of the gods. What’s not to like?

Oh, and the town even has a Sausage Festival each year.

A quick shower and then we were off to find the venue for the Alde Valley Festival and the evening meal. Google Maps claimed it was less than 10 minutes away. Google lied. No change there I know but…

Located and parked, we walked past two sleeping KuneKune pigs.

I hadn’t known until today that they are the only true grazing pig and can live and fatten on grass alone without need for any supplementary feeding. And an acre of grass can sustain as many as 5 kunekunes. They’re lovely looking creatures, even more so when fully grown I think.

Let’s leave them sleeping. Oblivious to us and others wandering past their field. That’s it for this part. More to follow shortly.

And “one more thing” for this week?

Dirty burgers in every sense of the word.

I’ve eaten at only around 1/3rd of these places so far. So, plenty of work to be done yet. Starting with this stunning looking breakfast burger: sausage patties, egg, potato rosti, cheese, and candy bacon in a toasted muffin from Mother Flipper Burgers. Mmmmmmmmmmmmm. 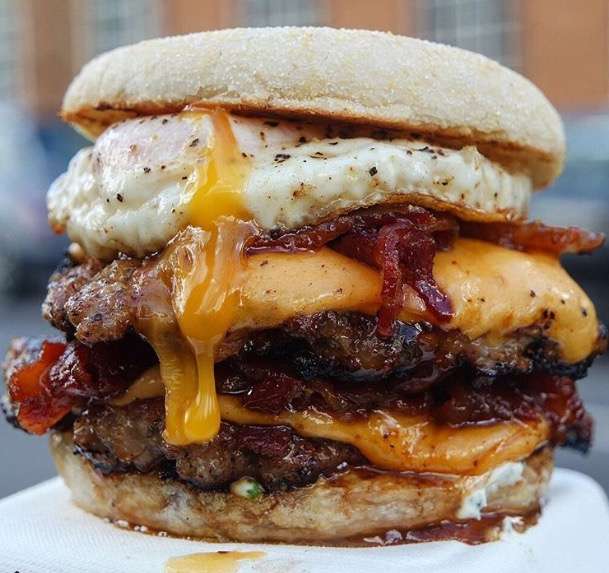