This; just this. By @hseanbrock

Ladeeeeez & gennnelmun, allow me to present to you. The one. The only <long, tense drum roll please>…

Yes, I know. Every person and their canine has written about this. And some time ago at that. It’s not exactly the latest news. But so what? Two reasons I’m posting this (a) it’s still a great recipe and (b) it speaks to the care shown by Brock and other chefs in continually tuning and re-tuning recipes and how they present on the plate. 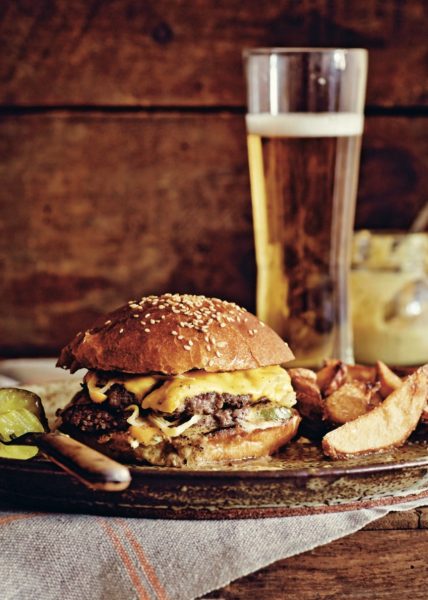 And unless you’re just microwaving shop bought ready meals all the time, there’s something to learn in here for everyone who cooks, small or large, often or not so. And that’s me. I know, ‘cos Val told me so 🙂

We start off with the man himself running through his methodology via a Breville (!) video:

And then describing his thinking process to Eater: with a full run-down on each stage of the “build”. Again, it’s a good example of the fanatical attention to detail he brings to bear. 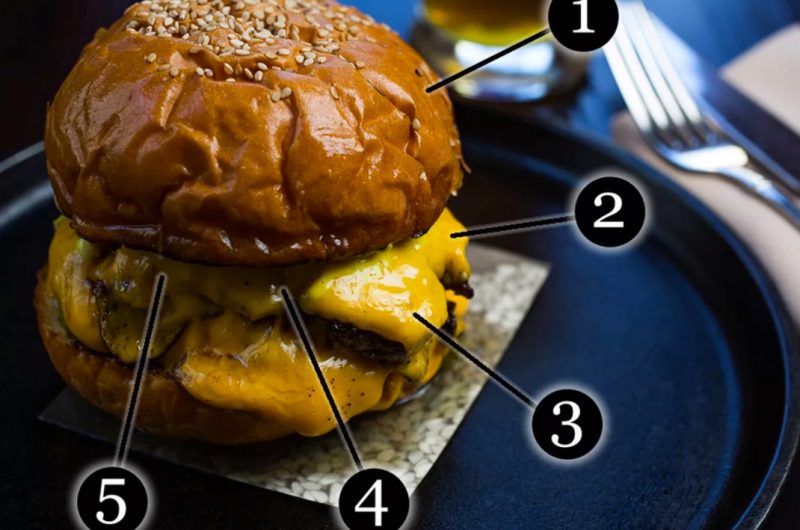 OK, broken down via these diagram numbers:

The Husk bun is all about squish. Brock decided on the house-made buttermilk and benne seed bun because it stayed moist and soft, even after toasting gave it a good crunch. The sliced buns get a spread of butter and beef fat and then are griddled. One of the secrets of the Husk bun is that before all that happens, the bun is steamed. Steaming is a recent development in the prep which Brock says lends “industrial squishiness to a handmade bun.” The bun is also critical to the burger’s structural integrity. It readily soaks up juices, but doesn’t fall apart.

The two Benton’s bacon-infused patties on the Husk cheeseburger have become burger legend. While Brock used to use a ribeye-brisket-chuck blend, he has recently switched purveyors and is now using 100% chuck. Brock sears the patties on a Keating griddle, which is nonstick and incredibly hot. The heat gives the burgers their crust, and when the burgers are finished they are scraped off the griddle “diner style.”

Brock’s inspiration in grinding hickory-smoked Benton’s bacon into the beef came from a frustration he had with that seemingly inevitable moment when the bacon strip falls off the burger. Not only did that “wrestling” annoy Brock, but it left the flavor balance of the burger off. Brock went with the supremely smokey Benton’s because he wanted the elemental Southern flavors of wood, charcoal, and smoke in his burger. Cooking the burger over charcoal wouldn’t create the crust he was looking for, so Brock opted to add smokiness with bacon. Roughly 5% of the total mass of the patties is bacon.

There is only one rule at Husk: No other cheeses besides American cheese will ever be served on the cheeseburger. Ever. Brock picked American cheese for its meltability. Because the product is basically a milk gel, Brock explains, it melts into a “goo” that no other cheese can match. The three slices of gooey cheese grab onto the patties without falling off into a liquid, which appeals to Brock’s sense of burger structure. Brock also says the flavor of American cheese reminds him of being a kid, which is part of what makes his burger comfort food.

As with every element of the Husk cheeseburger, the toppings contribute to sound burger structure. White onions are shaved onto one of the patties after it’s been flipped, and are then steamed below two slices of American cheese, leaving them somewhere between raw and cooked. By the time the burger gets to the diner, the onions, cheese, and patty become almost like one mass. Bread & butter pickles give the burger an extra acidic note, since Brock drains the brine and then holds the pickles in straight white vinegar before adding them to the bottom bun of the burger. Brock puts the pickle on the bottom because of the squeeze factor: the pressure exerted by the diner’s four fingers on the top of the burger can cause pickles to slide off, whereas the thumbs holding the bottom of the burger don’t squeeze as hard, keeping the pickle in place. When, and only when, local lettuces and tomatoes are in season, Brock adds them to the burger as well.

Inspired by the classic secret sauces of burger masters like In-N-Out and Shake Shack, Brock created his own “special sauce.” The sauce is basically every condiment Brock wanted on a burger including (but not limited to): ketchup, mayonnaise, mustard, pickles, and jalapeños. By mixing “every condiment you could want” into the sauce, Brock aims to further streamline his burger. A “tiny bit” is added to each side of the bun, leaving the diner with a burger that needs no additional dressing when it hits the table.

Until finally, courtesy of the fine folks at Food Republic who blagged all this detail directly from Chef Brock, here’s the recipe in all its majesty:

And finally, the prep work: