Berkshire pigs, or かごしま黒豚 as they say in Japan.

The Berkshire (which, like so many of the breeds “recognised” nowadays, to the despair of Julian Wiseman op cit., is named after a particular area or, in this case, English county) is the oldest recorded pedigree pig breed in Britain — the earliest pure breed is recognised as the Tamworth, of which more later — and was the first British breed to have an official Herd Book opened.  And it’s a beautiful black creature.

The breed probably originated in the Thames Valley, possibly around Wantage, around 1790. It would have begun as a large tawny red pig, spotted with black or varying patches of white. The ears were inclined to be pendulous, the body long and thick, with short legs and plenty of bone. In a word, a coarse animal…

There are reports — although I’ve yet to find the originals, everyone merely quoting this “fact” as gospel — that Cromwell’s troops, when stationed in Reading, made special reference to this local breed of pig, as ‘renowned both for its size and the quality of its bacon and hams’. This is one of the earliest records of the Berkshire although the 17C. breed was very different to the modern variant, being distinguished (as indeed were most “breeds” of the time) by its size and variety of colours. The obsession with white pigs, as though in some way, the colour will taint the meat, is a more unfortunate modern one.

Again, like a lot of the other breeds I’ve written about, the modern Berkshire was improved in the late 18th and 19th centuries by the introduction of Asian (Chinese and/or Siamese) stock. It’s not recorded which of these many variants were crossed but it’s plain by the effects — not least the “dished” face — that this was indeed done. The breed was popular during the 19th and in the first half of the 20th century but declined in numbers when the UK emphasis in pig farming turned to bacon (READ: “less fat”) production and “white” pigs. As an aside: does anyone else think “Hutton” is almost synonymous with “Beeching” in terms of the damage caused?

Around 1825, much breed improvement took place, driven by Lord Barrington before his death in 1829. And the Berkshire enjoyed special favour with the British Royal Family, including Queen Victoria, who bred the famous boars, “Windsor Castle” and one called “The Ace of Spades”. Black became established as the breed colour. Other distinguishing characteristics were encouraged including the pricked ears, white socks, white blaze and white tail tip.

The decline has been halted to an extent and larger herds of the breed are still maintained in England by the Rare Breeds Survival Trust at Aldenham Country Park, Hertfordshire, and by the South of England Rare Breeds Centre in Kent. However, the Berkshire is still listed as ‘at risk’, although rising in number since 2008 when fewer than 300 breeding sows were known to exist.[1] Still, the figure of 472 sows & 124 boars in the last survey of 2013, is a fragile ecology. Some pigs of the breed are also kept in New Zealand, but it is estimated that there are now fewer than a hundred purebred sows there.

Berkshire’s were introduced to Canada in the 1830’s and, as quoted in the (extinct) Canadian Farmer in 1867 ‘for quality of pork and bacon, the modern Berkshire still stands unrivalled’.

In the United States, the American Berkshire Association, established in 1875, gives pedigrees only to pigs directly imported from established English herds or to those tracing directly back to such imported animals.[2]

The pig is also hugely sought after by the Japanese who love this variety and it’s bred in Kagoshima Prefecture, Japan, under the trademarked name Kagoshima Kurobuta (かごしま黒豚, lit. Kagoshima black pig). It’s known as the Kobe beef of pork. They’re slow growing which means that the meat they produce is more mature, which leads to darker meat with extra fat which is in an ideal position as marbling rather than a thick surface layer and this fat enhances the flavour and brings juiciness to the meat. Just ask your butcher to allow you to take a look at the marbling and you’ll understand why.

From the US we have Low’s “Berkshire Hog”, p. 101, cited here, where you’ll hear similar ideas to those mentioned by Wiseman:

“Those varieties of the swine of England, which have received the name of breeds, have been usually named from the counties, or places where they have been reared in numbers — thus we have the Hampshire, the Suffolk, the Berkshire, and other breeds, each supposed to be distinguished by a set of common characters. Of these breeds, one of the earliest improved was the Berkshire, so named from the county of that name; but the principal improvement of the breed was made in the counties farther north, chiefly in Leicestershire and Staffordshire. It still retains, however, its original designation, and the Berkshire has long been known as one of the most generally-spread of the improved breeds of England.

“The true Berkshires are of the larger races of swine, although they fall short in size of some of the older breeds, as the Hampshire, the Rudgwick, and some others. They are usually of a reddish brown color, with brown or black spots — a character which makes it appear that one of the means employed to improve them, was a cross with the wild boar. The Berkshire has long been regarded as one of the superior breeds of England, combining size with a sufficient aptitude to fatten, and as being fitted for pork and bacon ; it has been regarded also as the hardiest of the more improved races. The Berkshire breed has, like every other, been crossed and re-crossed with the Chinese or Chinese crosses, so as to lessen the size of the animals, and render them more suited to the demand which has arisen for small and delicate pork. — Many of the modern breed are nearly black, indicating their approach to the Siamese character and sometimes they are black, broken with white, showing the effect of the cross with the white Chinese: from this intermixture, it becomes in many cases difficult to recognise, in the present race, the characters of the true Berkshire. And although no doubt can exist with respect to the great benefit that has arisen from diminishing the size and coarseness of the former swine of England, yet assuredly there should be limits to this diminution in the size of the hog, as of every other animal cultivated for food; and, in many cases, the diminution of size has been merely to suit the caprice of taste. — The larger kinds of pigs do not find a ready sale in the markets of great cities, and hence, the more essential property of an abundant production of butcher’s meat is sacrificed; but we should remember that the supply of pork is of immense importance to the support of the inhabitants of every country, for in the state of bacon it is largely consumed by the mass of the people, and in the salted state, it is used in the supplies of shipping — it is not, therefore, for the general good, that the old breeds of England should be merged in the smaller races of China and other countries; and while we should improve by every means the larger breeds that are left us, we should take care that we do not sacrifice them altogether; the country might one day regret that this over-refinement has been practised, and future improvers exert themselves in vain to recover those fine old breeds which had been abandoned! 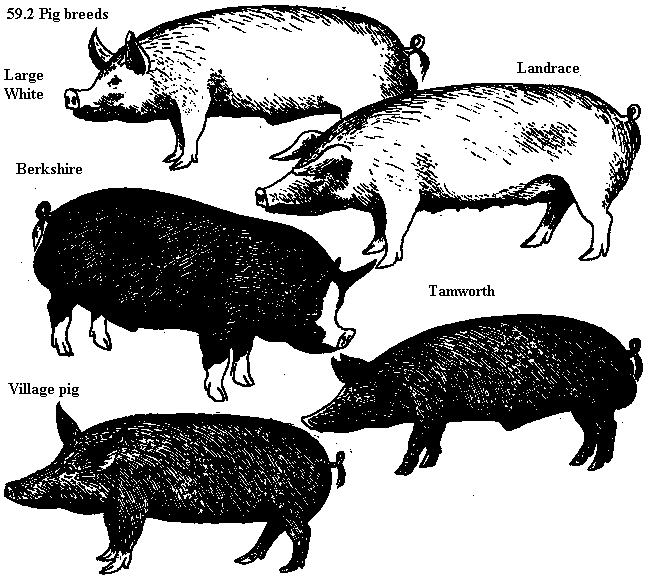 In place of unceasing crossing with the smaller breeds, it would be more praiseworthy and beneficial, to apply to our larger races those principles of breeding which, in the case of other animals, have succeeded. By mere selection of the parents, we could remove all the defective characters of the larger breeds, and give to them all the degree of fineness which consists with their bulk of body; for there is no animal so easily changed in form and moulded to our purposes, as the hog.

“Hogs are from time to time brought by our innumerable shipping, from the countries of the Mediterranean, as Italy, Turkey, Spain, and mingled with the swine of the country. Of the Mediterranean breeds, the Maltese was at one time in favor; it was of small size, black color, nearly destitute of bristles, and capable of fattening quickly; but at the present time, a breed from the country near Naples has been introduced, and has been employed very extensively to cross the other breeds: this breed, like the Maltese, is of small size, and of a black color: it is nearly destitute of hair or bristles, but on being bred several times in this country, the bristles come: the flesh is exceedingly good, but the animals themselves are destitute of hardiness, and unsuited for general use, but they have been made to cross the other swine of the country, and the progeny exhibit much fineness of form and aptitude to fatten: their flesh too is delicate, on which account the Neapolitan crosses are in considerable favor in several parts of England. But there are other races of Italy which might, with greater benefit than that of Naples, have been introduced into this country; the best hogs of Italy are supposed to be produced inthe Duchy of Parma; they are of larger size than those of Naples, while they possess even greater aptitude to fatten, and yield pork equally white and delicate.”

I’ve already mentioned the breeds place in literature, with George Orwell & the Berkshire from “Animal Farm”, but let’s not forget that there’s also “The Empress of Blandings” in P. G. Wodehouse’s Blandings Castle series of novels and stories and the sow “Pig-Wig” in Beatrix Potter’s The Tale of Pigling Bland. And of course, it’s mentioned in Mrs Beeton’s classic, “Book of Household Management”, as the ‘best and most eligible animal’. 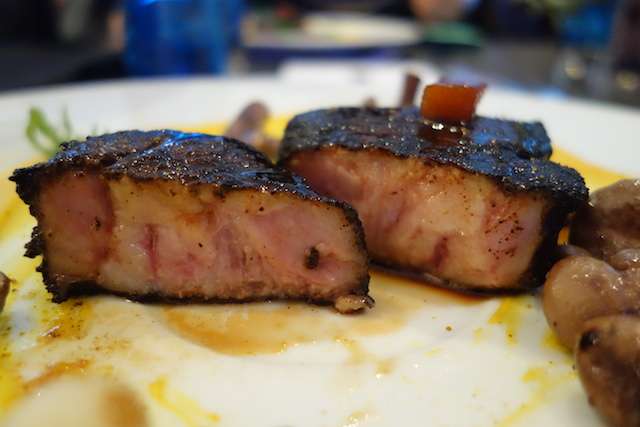 The standard was last reviewed in 1983 and the following guidelines apply:

Neck: Fine, evenly set in shoulder, free from wrinkles and free from crest.

Shoulder Blades: Fine and well sloping. Special notice to be taken regarding this point in females.

Ham: Broad, wide and deep to the hock.

Belly: Straight underline, with at least twelve sound and well placed teats.
Bone: Well developed in males and fine in females.
Flesh: Fine and free from wrinkles.
Hair: Long, fine and plentiful, with absence of mane, especially in females.
Colour: Black, with white on face, feet and tip of tail