We were looking forward to Sagardi; the Basque restaurant in Shoreditch, that has scored so many plaudits from people who’ve eaten there — both critics and the common folk — for the quality of their Txuleton meat but also for the other interesting menu items inc. their seasonal vegetables, as well as their tripe and salt cod aka “Grandma’s home cooking”. You can see what I mean below; it sounded hugely exciting. 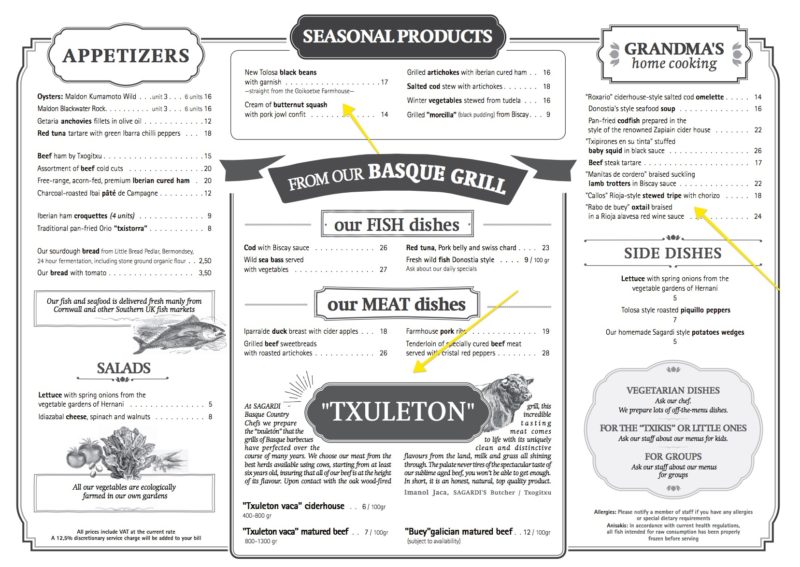 Having pretty much starved myself all day (a home cooked English breakfast and a lunchtime burger. All I’d had. ALL DAY), we headed there for the eagerly anticipated carnivore nirvana. And the experience sucked. Simple as that. Service was almost non-existent; “patchy” doesn’t begin to cover it and we never did get offered a wine list. The salt cod for Val was all overpowering salt and no cod taste. My rabo de buey was serviceable but not great. We should have paid more attention to the bad end of the reviews on Trip Advisor and elsewhere. My (slightly longer version of this piece) review has been posted at the “Terrible” end of the spectrum. Whereas a quick burger, truffle & cheese fries and an IPA at GBK the next day was both more enjoyable and far better serviced! Alright, enough already, move on Bulow eh? No one died after all. It was a wasted hour of our lives but that’s all; we at least aren’t starving or forced to live rough on the streets.

“The Other Bits” course at Cannon & Cannon, in their offices, snuggled away at the back of Borough Market, on the other hand was the perfect antidote for the previous night’s disappointment. 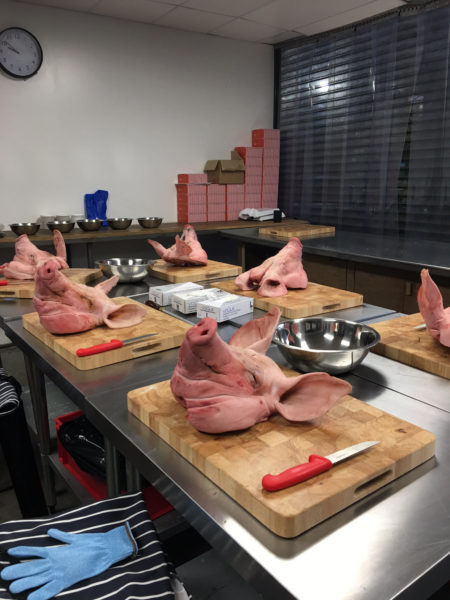 See this guide below? Those two short, deceptively simple, lines? “Completely debone the head” and “roll the head up & tie it into a kind of ‘Swiss roll’ shape”? That process took me and the 5 others there, the best part of 2 hours to do. Have you any idea how easy it is to make a hole in the skin when clumsily cutting too far, fast or deeply? I now do. And have a renewed respect for the speed and skill shown by professional butchers and chefs. As I said out loud, halfway through, as my knife yet again caused yet more unintended damage to the skin and head meat,  “thank the deity I’m not training to be a surgeon, we’d have mass deaths”. 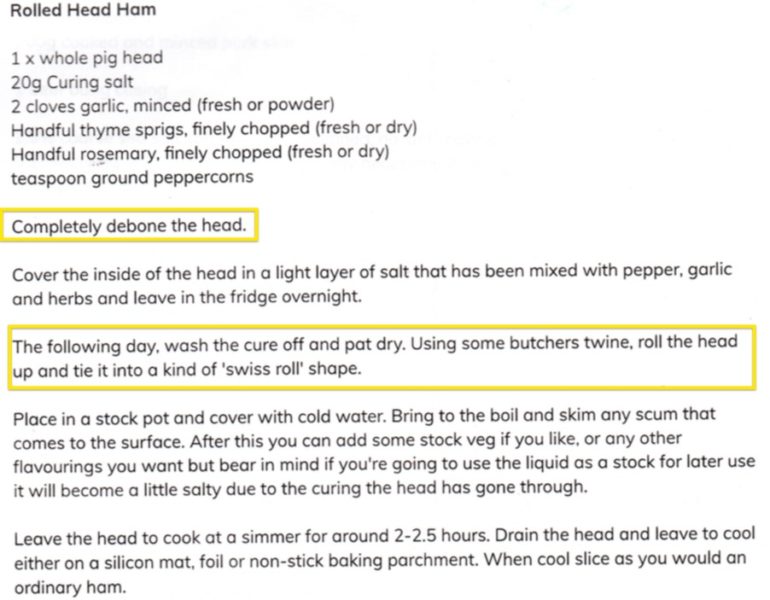 Ably led by Hugo Jeffreys of Black Hand Food (and his partner in crime, fellow butcher Sam) alongside the estimable Nicky — marketing maven at Cannon & Cannon — who’d setup and organised the space, luckily for me, they all adhere to this philosophy below, which helped me remember that although the result I came up with wasn’t necessarily the prettiest or most professionally executed porchetta di testa ever, it was, still, all entirely edible. And anyway, after all, you have to remember, that it’s the face of a pig, rolled around all the head meat as well as the ears & the tongue extracted from the mouth cavity — it’s never going to win any beauty prizes at Vogue or London Fashion Week…

Punctuated by vignettes from his catering life (ex-sound engineer, chef, baker and now charcuterie expert and butcher), hints about how to sharpen the knife (away from you, a stricture honoured more in the breach than the observance it has to be said), details about the rare breed he uses (Gloucester Old Spot — I’d earlier asked) and useful (and possibly life saving) information for those unsure about how and why to use Prague Powder No1 (sodium nitrite) or No2 when curing, plus timely assistance when any of us found our cutting way blocked by bone or cartilage, most especially when navigating around the eye-balls, a great time was had by all.

The last 40 minutes or so were taken up stuffing a newly washed (it still smells of course) beef bung  with minced pork and our own additions of spices, herbs, tied off in the appropriate manner (double knot, including a small ‘bubble’ filled with the mixture of course) to make cotechino; it looks like nothing so much as a haggis to be honest. Both this and the head ham are now back home, to be cooked later in the week — I’ll add some photographs here as they come out of the fridge and cooking pot.

Three hours after the course started, we were done. Aprons & armoured glove handed back, knives cleaned, work surfaces scrubbed down, the day finished with a beer at the Cannon & Cannon stall in the market where we were walked through sampling their current line-up of amazing charcuterie. A great range of suppliers (inc. Hugo’s Black Hand) produce some of the best cured meats I’ve eaten anywhere. I wound up buying one of everything I think. Think? I bloody well know I did. Not cheap; but oh boy, some great flavours ahead of us.

If you do get the chance, go to this course (or any of the others they run); and even if you don’t, buy their meats. You’ll regret neither choice. I mean doesn’t your mouth immediately start watering looking at this range?

And finally? This (lo-res) piece by Peter Lawrence was one of a number on display at the Bankside Gallery, highlighting work by The Society of Wood Engravers. It’s beautiful. And it mentions OXO. I love it. I desire it.

And finally, finally, a last word for offal. This map, via the Great British Chefs “Foodie White Paper” — well worth a read in full — shows that we’re slowly, finally getting back to starting to use the whole animal, head to tail, as our mums. grans and forebears did. 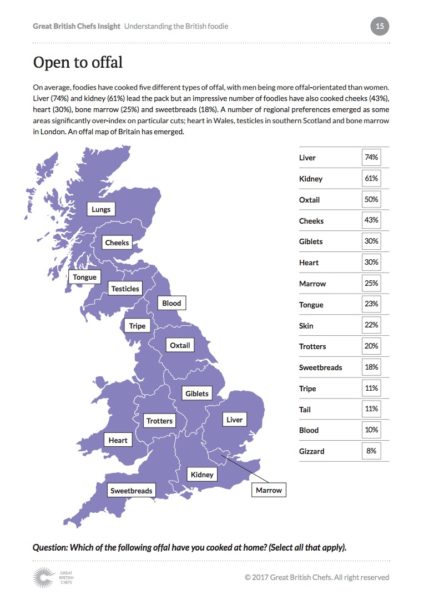