You say you want “The Steak (R)evolution”, well, you know…

I’m pretty keen on pigs as you may have surmised. Monomaniacally at times, or so I’ve been told. But I’m not going to say “no” to other types of meat, especially not to good beef. And especially not to some aged Galician Blonde, for example…

So, today is a slight diversion off the One True Pig Path™ to amble along a Beef Back-Alley. And no, that’s not a euphemism.

This 2014 film and the title of this post was directed by Franck Ribière and starred Yves-Marie Le Bourdonnec, a French butcher who is no stranger to controversy. Notorious in his native land for saying “Non!” to some Michelin-starred chefs who wanted to buy his meat, instead choosing to sell to locals – and those foreign customers willing to come to him – a range of choice cuts, hung more as though in a gallery or emulating haute couture Chanel garments, at his shops (of which he now has four) in and around Paris.

He is also known for his diatribes against “industrially-produced” beef from animals fed only on cereal by the French farmers he says are pretty much owned by the industrial grain lobbies.

“Our breeds are fine for stews, boeuf bourguignon, and pot au feu as they have a lot of collagen, which is good for boiling, but little fat. A good English roast beef can be eaten alone, you add nothing.”

It’s a controversy one critic compared to “Asterix siding with the Romans”, putting under threat a pillar of Gallic culinary pride. And his final insult to his fellow butchers? He didn’t hold back in this film, claiming that grass-fed British beef is best, saying “we have lost the notion in France of what a good steak is. In fact, we simply don’t know what it is any more,” going onto declare “the best rearers in the world are the British.” So, for this sacrilege, his butchers’ guild expelled him. To be honest, I don’t think he really gives a flying foutre.

You’ll gather from all this — and in the course of the film — that he’s a real modest, shrinking violet. Or rather not. Self-publicist he may be but the points he makes, forcefully, throughout this film, resonate with the whole movement towards sustainable ethical, farming practices.

His “round the world” quest for the ultimate in steak started because he felt that that elusive taste that we all seem (or claim?) to remember from our childhood (or reports of older peoples’ childhood!) was disappearing. And he’s right of course. The industrial mega farm cartels involved in producing food want to make things quicker, not better. Because in meat terms (just as with wine) the older something is, the more the flavour has had a chance to develop. But old means more expensive to raise, feed & keep on the farm “asset” side – so it’s not a programme that the hedge fund owners can get behind – they want a quick “investment”, asset-strip the balance sheet and depart with their tax free looting.

During the course of the 90 minutes or so of this fascinating film, the action moves from New York to Yorkshire, from Scotland then to Japan and then to the panoramic open spaces of the Argentinian Pampas via Sweden, Spain, Canada and Corsica.

So where in the end did he find the best steaks?

<Drum roll> In second place comes the redoubtable Tim Wilson of Ginger Pig fame, whose porterhouse steaks are 35-day dry-aged. I’ve mentioned him before at the end of this blog piece. His Longhorn cattle herd are kept out on mixed species grass fields, right on the edge of the North York Moors. Hardy folk up there; the same obviously applies to their cattle…

Tim also spoke to that same question of flavour, bemoaning the fact that many of our UK farmers now use those same disappointing continental breeds and feed them grain to fatten quickly. In the film, Yves-Marie said that by relying mainly on the ‘athletic’ incumbent breeds of Blonde d’Aquitaine, Limousin and Charolais, finishing them on grain-based diets means that French meat just can’t cut the mustard as a centre-piece.

<Longer drum roll>. But number one spot went to the Spanish butcher (and chef), José Gordon of Bodega El Capricho near Lèon. He buys mature, working ox bulls and then retires them, quite literally putting them ‘out to grass’, for another few years. He spends time with them, getting to know them and their characters – with the most calm & docile producing the best meat, he says. And he does do just that; you’ll see him giving one enormous bull — who towers over him — a good scratch and a tickle before letting him out — into what looks like their garden — to (I’d have to say if it weren’t a bull) almost gambol, play & romp.

And at the end of their lives they can be up to 15 years old and weigh as much as 1600kg – more than twice the size that a similar animal in England would be slaughtered at.

“Gradually I came to the conclusion only a happy cow will produce a good steak …It is not strictly a question of maturation or cooking, but a genuine and strong bond between man and animal is essential. The man who keeps talking to his animals and feeds her for 15 years before killing her, is guaranteed to produce better meat in the end.”

The thought of keeping a cow until it’s 13,14 or 15 years old would strike wild panic into the dark, ice-cold, hard little hearts of the mega producers and isn’t, quite frankly, an easily attainable option for most of the beef farmers over here in Merry Olde but it shows quite conclusively that the ideas espoused here and by others, of taking things slowly, not rushing the production process, looking after the welfare of the animal, is the way to go. Ethically & morally and also because it’s just the “right thing to do”.

Watch the film. Read this book (“Steak: One Man’s Search for the World’s Tastiest Piece of Beef“) by one of the people interviewed, and drool over all that meat. It’s worth 90 minutes of your time, anytime.

But you didn’t think I would leave without at least one little reference to pigs did you? You’re right. His pork is no slouch either, aged for 10 days, using the fantastic tasting Noir de Bigorre that I wrote about earlier. He also has this great lady as a colleague and fellow butcher, Marie Flore, so a winner all round. [My thanks to Victor of Lucky Miam for these photos and a direct link to their original article which you should read!] 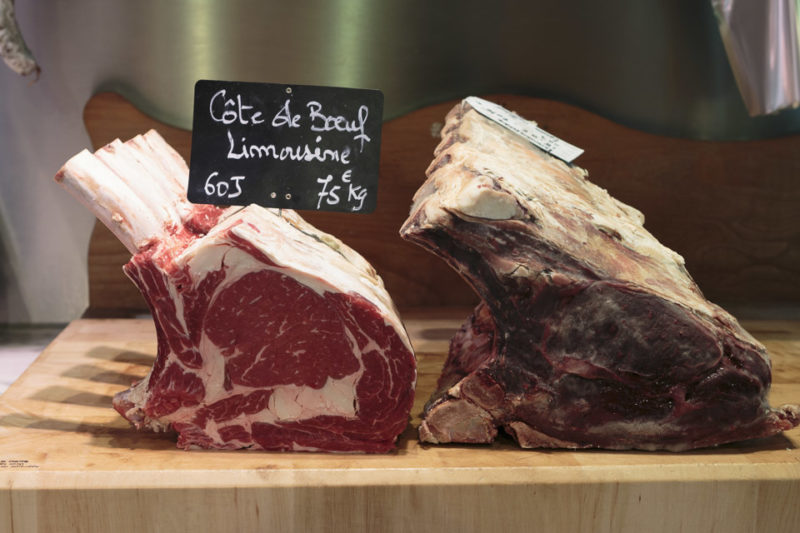 And finally. Look at this beautiful, beautiful Ibérico pork. That’s fat right there that is. 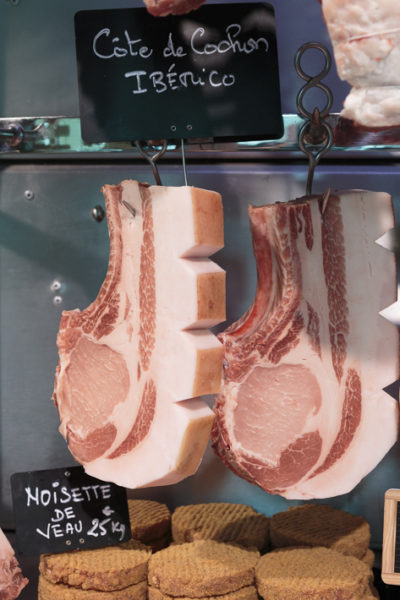