Le Noir de Bigorre; too fat and too slow to grow.

For this post, I’ve moved across the Channel to look at the Noir de Bigorre pig which almost disappeared forever some 30 years ago. Had it not been for the work of one man, then this lovely looking animal may not have existed today. And the reason for my geographical teleport, I hear you ask? Mainly down to the estimable Richard H Turner who pointed me at “A Steak (R)evolution”. More on that elsewhere on this blog. Search out the film. It’s a breed that has been described since at least Roman times — the geographer Strabo praised the quality of black pigs, claiming “they were the best of the Empire” — as living in the central Pyrenees, in the area around Gers. And, like so many others here and abroad, it was judged to be “incompatible” with the intensive breeding methods that came in after the 50s; this pig, like so many others, (thankfully) never managing to adapt to this new speedier regime and was heading for a rapid decline and ultimate extinction. 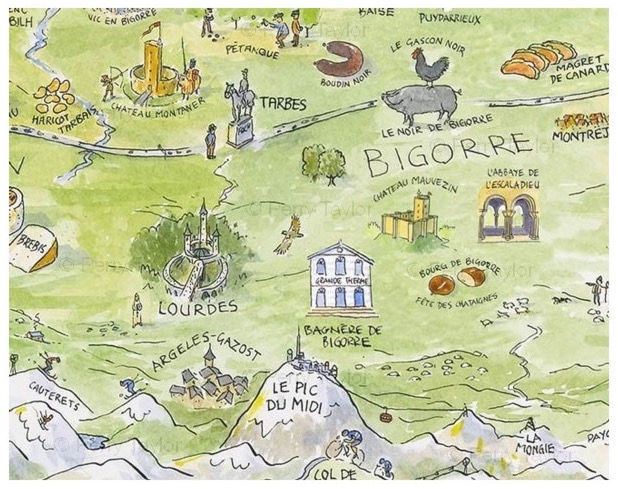 [NOTE: as a side-bar here, there’s not a huge extant body of poetry or writing devoted to the beauty of pigs. Not many contemporary accounts or descriptions, so for close to 1,500 years, those words from Strabo are about all you’ll get on the pig. You find lots of words written on lions, horses & elephants. But the wonderful pig? Not so much. And the reason? The pig has always been associated with the poor; and they’re too busy both scratching a living whilst trying not to be put to the sword by the great and the good (who are intent on sweeping across their small allotment of land & pillaging all the resources or taxing them to within an inch of their lives), to waste valuable time writing about something they deal with everyday.] 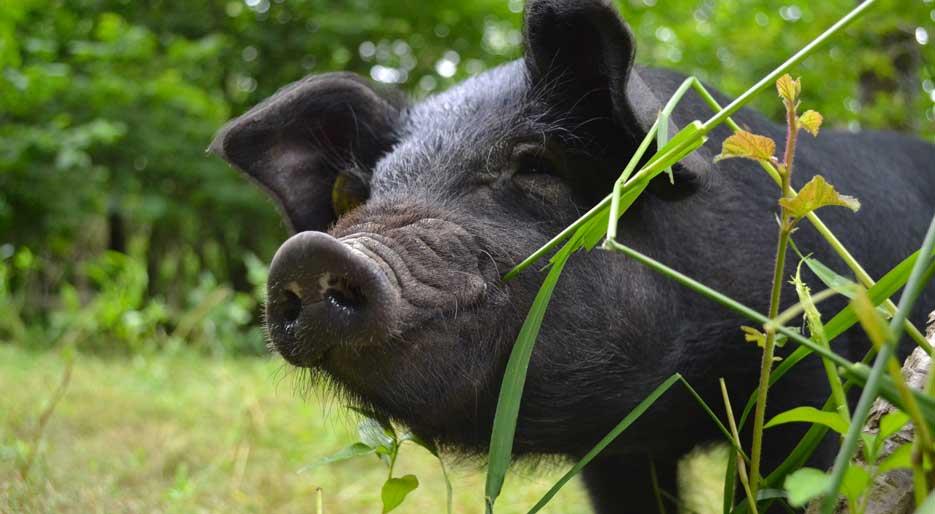 Anyway, around 1981, the hero of this story, Armand Touzanne (seen in a short video here)…

…started looking at how he could rescue the breed; at that time, only two Gascon boars and around thirty sows remained from the nearly 20,000 animals seen in a census in the 1920s, mirroring the same decline across La Manche in the English rare and pedigree breeds.

Taking full advantage of resources being thrown at a program set up to save some of these rare plant varieties and animal breeds (in a joint French/EU venture to mark Heritage Year), Touzanne, a consultant to the Upper Pyrenees Chamber of Agriculture, identified and catalogued the last few remaining heads of two local breeds, the Basque (Pie Noir du Pays Basque) and the Gascon; the latter later becoming known as the ‘Noir de Bigorre’ with a genetic heritage similar to their cousin, the legendary Iberico hog

But merely identifying the breed as one of those liable to disappear wasn’t enough, there still remained the main problem of how to ensure the ongoing stability of the breed; if this could be done, then the breeders would be paid well & thus encouraged to keep on keeping and breeding and nurturing this pig. Like those other specialist breeds I’ve talked about before, the Gascon really isn’t suitable for conventional fast growing, mass rearing methods. It needs space to roam, it puts on poundage (kiloage?) slowly, thus it’s more expensive to fatten, and its meat has a considerable percentage of fat. The very quality of its meat and fat would be compromised by intensive rearing techniques. But hey, remember, the great God “the market” i.e. the supermarkets demanding lean meat at low prices.

So he decided to home in on the quality of the meat; the breeders would then be able to charge prices high enough to cover the considerable rearing costs; it gives much less meat than that of a standard porker (a 100 kg carcass yields 40 kg of meat, compared to the normal 60 kg) which, alongside their longer life means the farmer has to expend a lot more cash before they can send it to be butchered and finally get paid.

One further big stumbling block was that the French had traditionally regarded ham as an everyday, quite mundane product and one they were not willing to pay a premium for (more fool them of course, unlike those canny Spanish), so the next move was to create a new, ‘gastronomic’ image for ham. In 1995, fourteen years after he set out on his mission, Touzanne, almost by accident, stumbled across the Bonomelli family, owners of the “Salaison Pyrénéennes” company. They had independently decided to to try and market a “Grand Cru” type ham and needed a quality source to work with. A timely synergy developed. They already produced a 12-month matured Bayonne ham called ‘Label Rouge’ so they took their new ham to market as ‘Noir de Bigorre’. 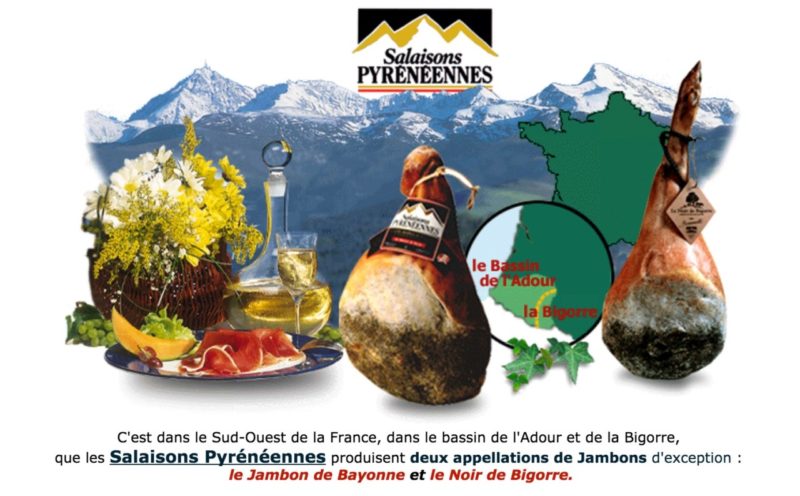 Another big leg-up came when, in 1997, the breed was officially recognised by the French Ministry of Agriculture who went on to mandate that the pigs have to be Gascon thoroughbreds, have to be raised for at least six months of each year in the open air and must not be sent to be butchered earlier than a year old. And in a further nod to good husbandry, breeders are not allowed to keep more than 25 animals per hectare of land and any artificial growth stimulants or hormones are a complete no-no.

Like the pata negra, as part of their totally vegetarian diet (well, the odd insect and gobbled bugs and worms aside) they’ll happily chow down on local acorns, chestnuts as well as barley, rye and wheat. Aged for between 20 and 30 months — against the 48 months the Spanish choose for the Gran Riserva Pata negra — it’s remarkably similar to, visually and taste-wise but slightly less pungent on the nose (although that doesn’t worry me, it can cause others to rear back slightly) than the one that emanates from the southern side of the Pyrenees. And it too also comes with veritable gobbets of that wonderful, “good” fat, that sensible people are now no longer afraid of…

And all the prep work is undertaken on the farm: they use local salt from the Aquitaine basin of the Adour river and the air-dried ageing process benefits both from the “Foehn effect” – named after the dry, hot wind that blows across the region every third or fourth day — and the damper air swept down from the Atlantic.

In 2000 the delightfully (it could only be only in France, well OK, and Spain I guess) named “Confraternity of the Friends of the Noir de Bigorre” came along to further pump up the meat’s visibility, with members including breeders, curers, and chefs and then in the following year a new company was set up to handle the butchering and sale of the fresh pork through local butchers and via high-profile restaurants. The breed is currently awaiting official designation as an A.O.C. (appellation d’origine contrôlée) both for its meat and for their prosciutto-style ham. And they’re not stopping there, with plans for other specialities as well, such as sausage and rolled pancetta to join the line-up. I for one can’t wait to try them all.

Word of mouth fame for the Noir de Bigorre has spread rapidly across the Old World and is now reaching as far afield as the Land of the Chrysanthemum. The latter of course are quick to recognise excellence in their porkers. Their near worship of the black Berkshire is legendary…

The breed looks more secure now; there are nearly 60 registered producers and it’s been trumpeted by some of Frances top chefs. Be aware that I’ve eaten at none of these places (yet) so this is pure name-dropping from my research, but Yves Camdeborde and Claude Colliot (a chef who I find cooked all of the dishes in Sofia Coppola’s Marie Antoinette) number amongst them, along with Jean-François Piège in Paris, Michel Bras in Laguiole and Anne-Sophie Pic in Valence who also highlight this meat among their specialities.

And it’s apparent that, like the Mangalitza and the other breeds taken up by name chefs, having these big hitters on their side does wonders for the animal; people want to eat at these restaurants, they then, salivating, rush back home to order the meat from their own butchers, so in turn, the breeders see demand rise and get paid more and thus, are encouraged produce more. A virtuous and tasty circle. So, Noir de Bigorre. Add it to your list of “meats to eat and seek out”.

And one last thing? 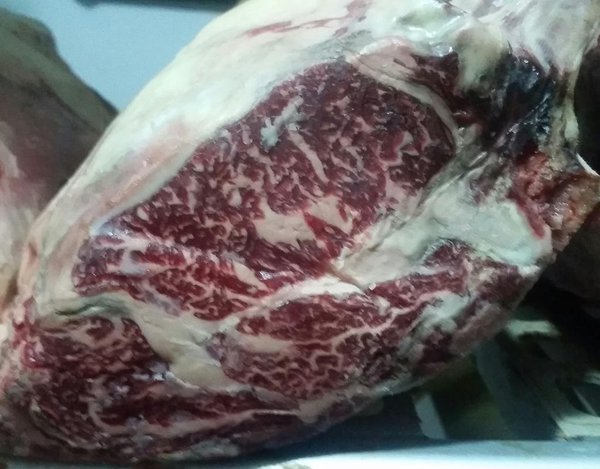