In this follow-up piece, I’m covering a little more of the history and stories behind this area and accompanying it with some rather good photos and videos whose existence I wasn’t aware of until after starting the research for this set of posts, earlier in the year. 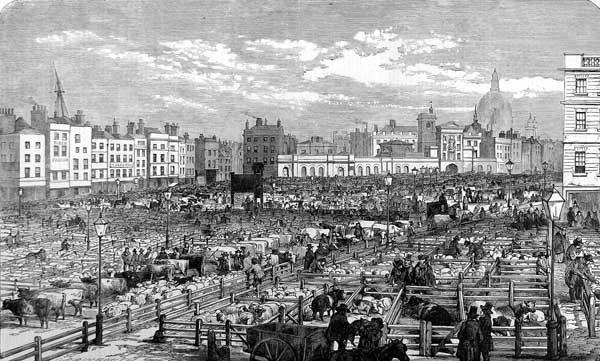 After all, Smithfield hasn’t changed that much really has it? From Max Schlesinger’ “Saunterings in and about London” in 1853 comes:

Surrounded by dirty streets, lanes, courts, and alleys, the haunts of poverty and crime, Smithfield is infested not only with fierce and savage cattle, but also with the still fiercer and more savage tribes of drivers and butchers. On market-days the passengers are in danger of being run over, trampled down, or tossed up by the drivers or “beasts”; at night, rapine and murder prowl in the lanes and alleys in the vicinity; and the police have more trouble with this part of the town than with the whole of Brompton, Kensington, and Bayswater. The crowd­ing of cattle in the centre of the town is an inexhaustible source of accidents

Sounds pretty much like the London we all know and love today, am I right? And all the way back since around the mid-12th century, Smithfield has been used as a live-stock market; at the time, a large open area right on the outskirts of London Town with wooden pens and a broad, open street market. And there’s this lovely tonal piece showing pigs in these pens in the 1840s… 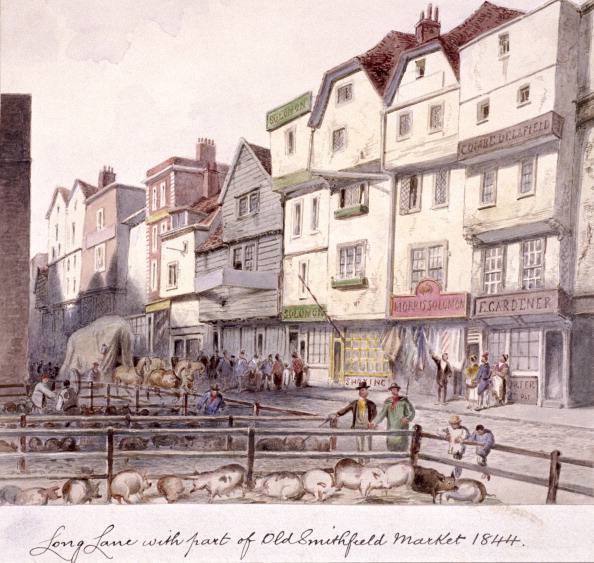 Turning down Sun Street and Crown Street, and crossing Finsbury square, Mr. Sikes struck, by way of Chiswell Street, into Barbican: thence into Long Lane, and so into Smithfield; from which latter place arose a tumult of discordant sounds that filled Oliver Twist with amazement. It was market-morning. The ground was covered, nearly ankle-deep, with filth and mire; a thick steam, perpetually rising from the reeking bodies of the cattle, and mingling with the fog, which seemed to rest upon the chimney-tops, hung heavily above. All the pens in the centre of the large area, and as many temporary pens as could be crowded into the vacant space, were filled with sheep; tied up to posts by the gutter side were long lines of beasts and oxen, three or four deep. Countrymen, butchers, drovers, hawkers, boys, thieves, idlers, and vagabonds of every low grade, were mingled together in a mass; the whistling of drovers, the barking dogs, the bellowing and plunging of the oxen, the bleating of sheep, the grunting and squeaking of pigs, the cries of hawkers, the shouts, oaths, and quarrelling on all sides; the ringing of bells and roar of voices, that issued from every public-house; the crowding, pushing, driving, beating, whooping and yelling; the hideous and discordant dim that resounded from every corner of the market; and the unwashed, unshaven, squalid, and dirty figures constantly running to and fro, and bursting in and out of the throng; rendered it a stunning and bewildering scene, which quite confounded the senses.

And even earlier in 1174, Smithfield was being described by a William Fitzstephen, clerk to Thomas à Becket, in his ‘Description of London’

‘In a suburb immediately outside one of the gates there is a field that is smooth, both in name and in fact. Every Friday (unless it is an important holy day requiring solemnity) crowds are drawn to the show and sale of fine horses. This attracts the earls, barons and knights who are then in the city, along with many citizens, whether to buy or just to watch.’

‘…and in another quarter are placed vendibles of the peasant, swine with their deep flanks, and cows and oxen of immense bulk’

An early map of London, ‘Civitas Londinum’, dated to 1561, shows these same large open fields and cattle pens. By now, the market area is being called ‘Schmyt Fyeld’.

The market area abutted the River Fleet, ages yet before it was to be finally covered over, so cattle coming to market were able to feed and water along its banks. 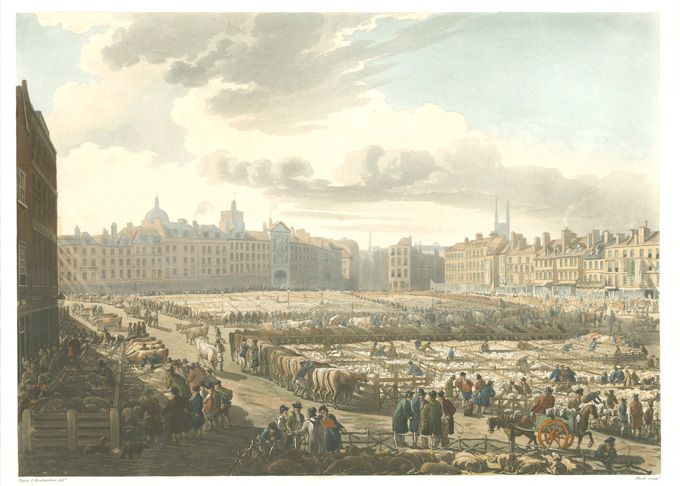 A bird’s eye view of the market (unknown)

And as a flat, open space — yet located conveniently close to the city centre — it was also an ideal location for public executions where people could come to picnic, gossip, meet and drink, whilst gazing on the next poor bastard to be dragged to the gallows inc. in 1305, William ‘Braveheart’ Wallace. The Peasant’s Revolt started from the same grassed area in 1381. And with executions continuing well into the 16th century, Henry VIII murdering large chunks of the Catholic population and his equally ruthless Catholic daughter, ‘Bloody Mary’, following up behind him and retaliating by burning in excess of 200 Protestants, it was an area drenched in blood, both animal & human. During the 17th century the site became equally popular for people to meet to duel, so even more ‘claret’ was spilled then, although later still, it was to become known as a prime spot to find a prostitute. A lover not a fighter. 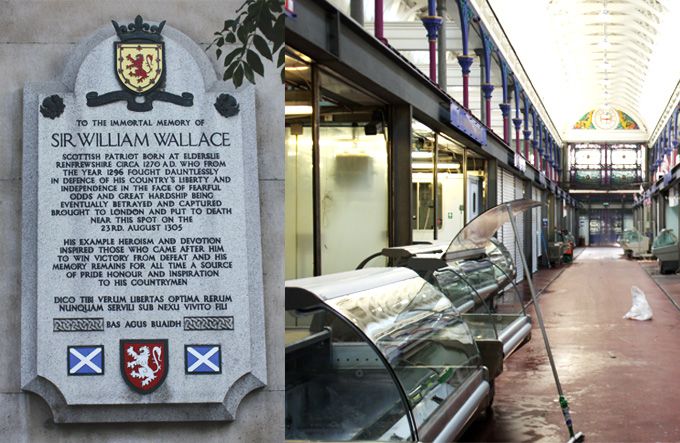 © A Potted History
Left: A plaque at Barts Hospital marks the death of Sir William Wallace in 1305
Right: The market today, pictured after the end of morning trading

Not a boring area at all. Like all of London, there’s huge chunks of history simmering not far under the film of the surface that is the modern life, overlaid on a palimpsest of centuries of human habitation.

For those of us (and maybe that’s you) of a certain age, British Pathé news reports were a fixture of life. Usually we got to see them in the cinema, with the famous cock-crow mascot introducing them, but also occasionally via various magazines and programmes. Having started out all the way back in 1910, they finally shuttered themselves in 1970, finding themselves unable to stave off the TV competition. But their archives live on and have been fully digitised. This link gives you access to some fascinating film of various reports from or about Smithfield. Well worth spending a few minutes to see some long gone scenes. I particularly liked the one reporting on The Meat Porters Derby from 1930.

There’s constant talk of “re-invigorating” the area by the property developer parasites who really actually mean that they want to turn the entire area into offices & flats for off-shore tax evading oligarchs & hot money despots. We really need a bonfire for these people and their vanities. Let’s start Mau-Mauing the Flak Catchers before this becomes just yet more faceless crap office space driven by terrible, lowest common denominator architecture, replacing such lovely buildings as this one, The Red House — a former cold store — and the idea of London as a city with communities of disparate & varied peoples and groups, turns into just a distant memory….