Let’s hear it for the “The Lard Information Council”!

I’ve mentioned before the Tripe Marketing Board. Instrumental in helping to make people love the “not so nasty” bits, as April Bloomfield memorably calls them, they existed as an organisation in England in the 50s and 60s. Tripe was a bit of a hard sell though, even then. Harder today — apart from amongst the more adventurous out there — Val, despite all her many and manifold virtues, isn’t a fan.

Whilst looking at a site over the weekend called “Praise The Lard” (a rather appetising charcuterie producer, not too far away in Louth) which led to this T-shirt available in the US… 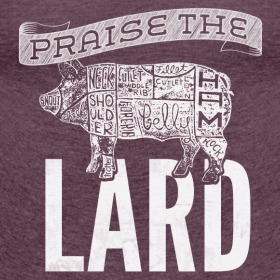 … I then came across this ‘genuine World War II poster‘.

Except it isn’t. Unfortunately. Rather, it’s a spoof (confirmed by the venerable Snopes) and is actually from an edition of an English comic called “Viz“. Number 52, February/March 1992 (and for the anally retentive amongst us, it’s on page 21). Which is a real shame as it’s a great poster for a great by-product from the pig. 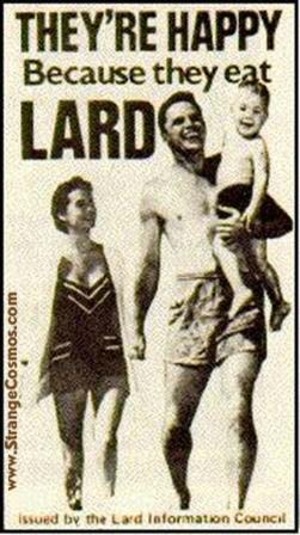 For thousands of years (wherever you found pigs being eaten), there, you’d also find lard. The English poor would start their day with a breakfast of lard & salt slathered onto bread; and, to quote Michael Pollan, it’s “the sort of food our great grandmothers would recognise as food” — it’s only recently that we’ve moved away to truly man-made food substitutes, rather than using everything from the animal. 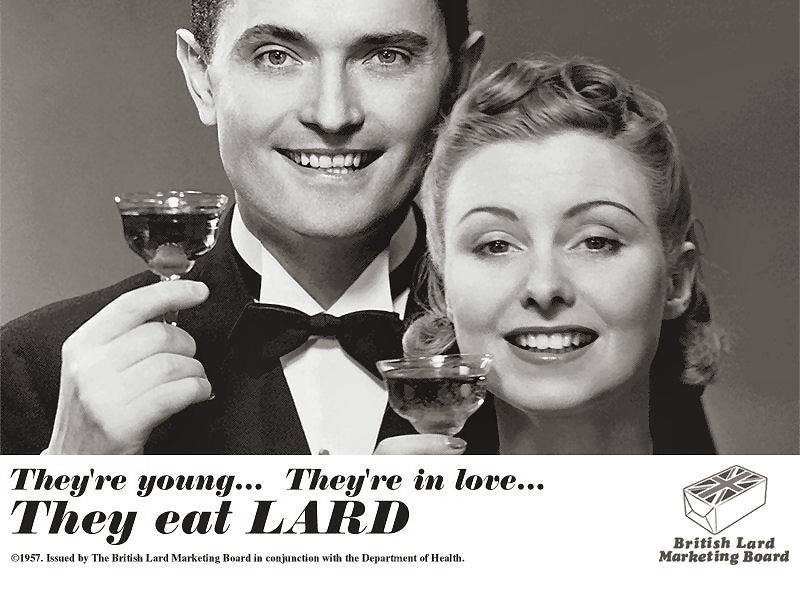 It’s still regarded with a love close to veneration in other countries — the Ukrainians have two festivals dedicated to “salo”, their word for their beloved lard. There’s also apparently a saying there: “Salo is when nobody fucks with you and you’ve got a bit of money”. Having a good bit of salo therefore is a prime indicator of the good life. Can’t argue with this whole concept, I have to say.

Lard has come in for some bad press over the recent decades, driven almost totally by those companies making margarine and other unnatural & unhealthy substances which actually ARE dangerous for you. But despite these scare stories, lard is actually a healthier fat than butter. Weight for weight, it has 20% less saturated fat, and is also higher in the mono-unsaturated fats which seem to lower the LDL cholesterol (“bad”) and raise the HDL ones (“good”). It’s also a useful source of serious quantities of vitamin D and, unlike the hydrogenated vegetable oils, contains none of those nasty trans-fats, the most dangerous ones of all. Whilst it also has more saturated fat than the rightly féted Mediterranean olive oil, nevertheless, food author Jennifer McLagan argues convincingly in her “Fat: An Appreciation of a Misunderstood Ingredient“, that its saturated fat has a neutral effect on your blood cholesterol, whilst Gary Taubes, back in 2012 in his “Why We Get Fat“, goes even further, believing that fat is actually pretty damn good for us all.

The Italians wouldn’t disagree with this concept. This beauty pictured below is their Lardo di colonnata, holder of an IGP mark from the EU, pork fat aged for at least six months inside marble tubs using nothing other than local sea salt and a variety of spices and it’s made only in Colonnata, a small village with a few hundreds inhabitants, located on a cliff nestled between the famous marble quarries of Carrara, in Tuscany. There’s more details here on the spices and process if you want to try your own version at home. And why wouldn’t you?

Eating it, you’ll spot a fragrant, scented aroma and note the delicate, slightly sweet taste, enriched by those spices and aromatic herbs used in the ageing process. And the very best way to eat it is — with rind removed and salt washed off — as very thin slices over fresh bread, warmed or grilled, with maybe some sliced tomato & onion. Tom Adams (if he hasn’t already) would make this from that prince of fat producing pigs, the Mangalitza. 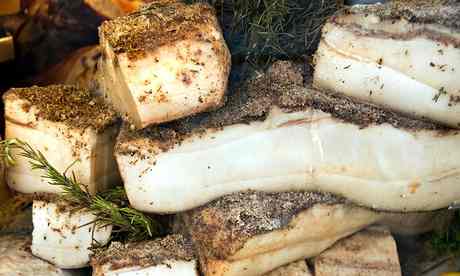 It’s a also hugely versatile fat for use in your kitchen. A relatively high smoke point means it’s perfect for producing that lovely golden, crisp <crunch> on chips or fritters. The good stuff you can get i.e. not that horrible bleached white block from the supermarkets but instead bought from a local butcher (or even home-made) has naturally occurring large ‘crystals’ or flakes of fat, making it also supreme for baking. And if you doubt me, you only have to ask Mary Berry… 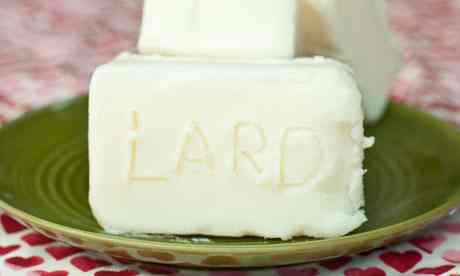 Blocks of lard. Photograph: Antonio Olmos for the Observer

So, can you make your own? Of course you can. The best (leaf lard) comes from that fat found surrounding the pig’s loin and kidneys. Slightly less prized is the “fatback”, coming unsurprisingly, from the animal’s back and then the soft fat, wrapped around the other internal organs. There are two ways to then use this fat to “render” into lard:

In the first method, dry rendering, you merely let it slowly melt down in a dry pan, skimming off — for later consumption! — the remaining bits of skin & meat that you’ll see starting to turn crunchy & golden. The second way, wet rendering, means you’ll need to boil the fat in water. I must say, I prefer the flavour from the dry-render version, as it retains that hint of roasted pork. And because of the process, it stays a nutty-brown colour and also smokes at a slightly lower temperature whilst the wet variant is whiter and is a more neutral flavour, with a higher smoking point. It’s also called pig butter, prosciutto bianco; go ahead, pop along to your butcher (or local farmer) today and start making your own!

I love ’em all. And so should you. Moderation in all things, remember — but make one of those things lard.