Back so soon? Excellent — great to see you visiting here again.

In Part 2, I’ll be revisiting boars and their descendants (the pig we all know & love today), touching some more on their history, their diet & their places in mythology…

“The Raven – A Christmas Tale, Told by a School-boy to His Little Brothers and Sisters“

Underneath an old oak tree There was of swine a huge company That grunted as they crunched the mast: For that was ripe, and fell full fast. Then they trotted away, for the wind grew high: One acorn they left, and no more might you spy….

That last was by Samuel Taylor Coleridge, capturing perfectly the sight and sounds of a group of pigs working their way though the food treasures they’d noisily excavated.

And here, with a more scholarly (albeit I think just as poetic) take, are Debby Banham & Rosamond Faith in their seminal classic, “Anglo-Saxon Farms and Farming”. 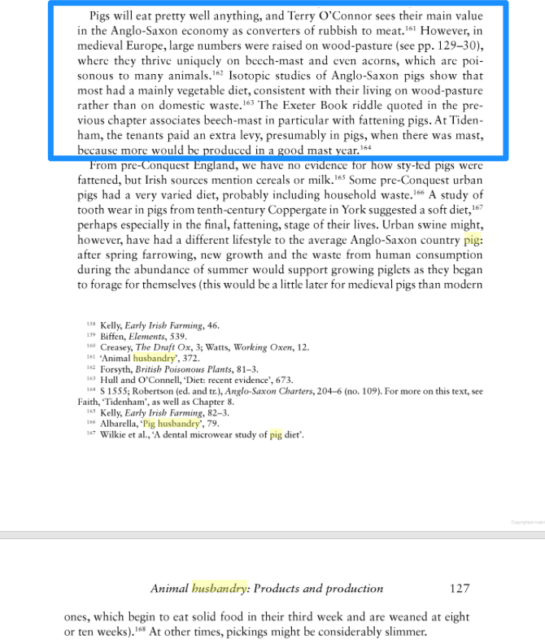 These pages shots are taken from the Google Books version, but let’s not encourage those corporate bandits eh?

Pay your fucking taxes Google; and that self-same exhortation applies to all the other bull-shit “disruptive” neo-feudalist operations who, despite the highly paid efforts of their excellent PR teams to persuade you otherwise, aren’t your benevolent friends with your best interests in mind, but are — just as were the robber-barons of the 19th Century, since almost canonised by age — intent only on parting you from your hard earned (and let’s not forget, taxed at source) money as quickly as possible, whilst paying no real taxes anywhere!

Instead, click on the link above or here and send money to the authors instead?

OK, rant over for the moment.

One final clipping speaks to their continuing importance to the poor of the world already touched on in an earlier post. 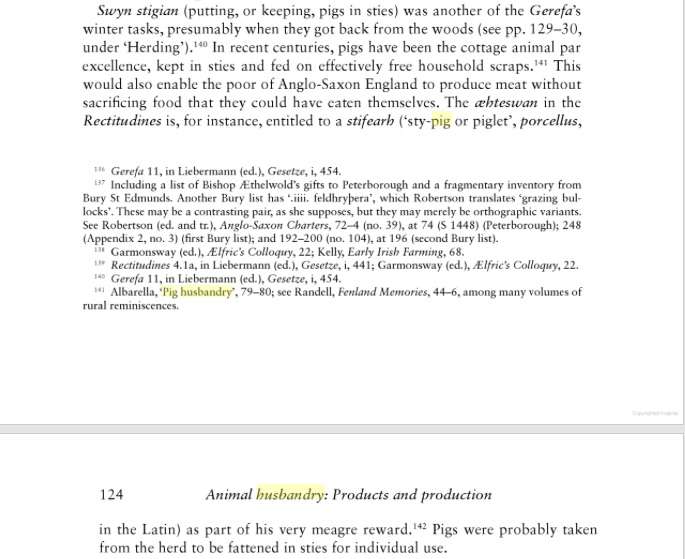 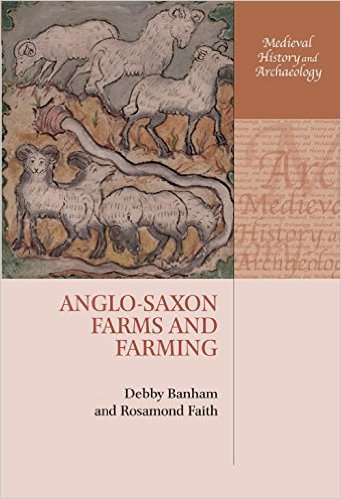 I suppose that, in the interest of balance, I should say that boars and pigs aren’t universally loved all the time.

Recently, the Chianti regions’ winemakers have been backing a plan to cull up to 90% — a number of planned corpses possibly totalling as many as 200,000 — of the region’s wild boars over the next 3 years.

That the boars are doing what they always do, namely rooting around & digging up newly built fences and good earth then eating the grapes off the vines may have something to do with this plan…

It’s a complicated problem; a vibrant & profitable black market for wild boar meat has kept the local hunters financially interested in maintaining this population, even to the extent of illegally encouraging them with loaves of bread. Along with the explosive fecund growth in boar numbers — who after all now have few extant natural predators — with the simultaneous rise of that of an also hungry, small local deer, called caprioli, who nibble the tastiest tops off the vines, everything has conspired to cause them to expand hugely their feeding zones, encroaching into the areas that the wine-makers consider, understandably, to be sacrosanct to the production of the Chianti Classico grapes.

Whether this killing will be agreed and accepted by local legislators and activists is still up in the air. There may be a rather delicious glut of boar meat coming onto the market… 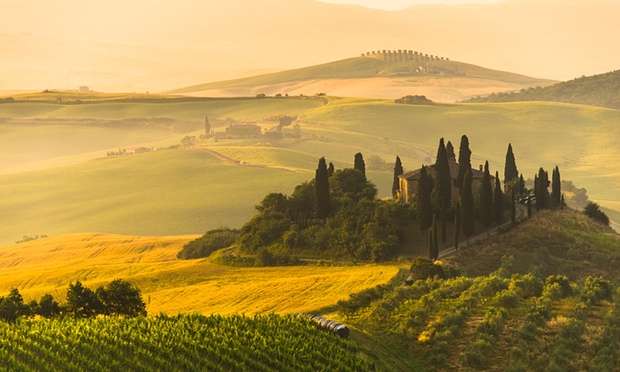 OK, enough of balance, back to some more titbits on the porkers.

The zhu 猪 is one of the twelve animals of the Chinese zodiac and traditionally symbolised the prosperity and good fortune of a family, especially one that could afford such a quality food source.

A vividly imagined and interesting Chinese custom was to ensure their young male children were clothed in hats and shoes in the shape of a pig. The parents believed this would mean they’d avoid the many occult pitfalls ahead since the evil spirits or demons would be fooled into thinking the child actually was a pig.

And what of Egypt?

There’s more than a little debate about the place of pig in ancient Egypt.

Was the pig connected with trichinosis and therefore thought unsafe to eat? Was the Set-animal a pig and thus to be considered taboo since Set was thought to be an “evil” god? Or was it simply considered unclean because of its particular habits?

It’s probably unlikely that the link between trichinosis and eating undercooked pork (which can also come from other meat, such as wild bear) was known at this time, so that’s one out of the way.

Pigs were herded, raised, and occasionally eaten from the Pre-dynastic period into the Late Period and Græco-Roman times.

As everywhere else, the domestic pig in Egypt descended from sus scrofa and during these periods, it was abundant across the country, ranging quite extensively throughout the Nile Valley, in the Delta, the Faiyum and the Wadi Natrun. They only became locally extinct around the turn of the 20th century due, as elsewhere, to over-hunting and the loss of prime habitat.

The oldest domestic pig remains found to date, come from the large Pre-Dynastic settlement site of Merimda Beni Salama in the western Delta, dating to around the 5th millennium BCE. Further pig remains have also been found at other sites (Hierakonpolis, Maadi, Abydos, and Armant), very near graves belonging to the poorer classes, indicating that pork was possibly a reasonably important element in their diet, at least at this time. Cattle bones on the other hand have been found in the graves dedicated to the more elite burials.

If there was a prohibition against eating pigs among the upper classes, there was none against raising them.

In the early 4th Dynasty tomb-chapel of Metjen at Saqqara, the deceased narrates that he received a bequest from his father that included “people, small livestock and pigs.” The 11th Dynasty tomb of the nomarch (“provincial governor”) at Beni Hasan depicts a herd of pigs, the first in Egyptian art since the 1st Dynasty. Yet, while pig-farming continued on during both the Old and Middle Kingdom periods, they are conspicuously absent from the scenes of daily life covering the walls of tomb-chapels of the upper classes and do not appear in the somewhat extensive votive offering lists. The explanation may well be as simple as that pigs are associated with grubbing in the dirt and rolling in the muck; thus perhaps being considered “unclean”.

Pig husbandry increased during the New Kingdom. Inscriptions show that temples and wealthy citizens maintained large numbers on their country estates, and tomb-chapels of several nobles from the early 18th dynasty illustrate swine along with other farmyard animals. The mayor of el-Kab relates that “he owned a herd of 1,500 pigs”. The temple of Amenhotep III in Memphis was endowed with some 1,000 pigs & 1,000 piglets, and the mortuary temple of Seti I at Abydos likewise held large herds of swine. 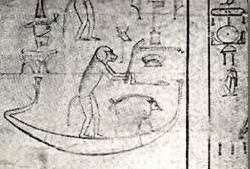 Pigs are even shown being used as farm assistants, treading seed into the soil, right up until around the time of Herodotus. Inscriptions on ostraca and other findings show that the workers at Deir el-Medina also occasionally consumed meals containing pork.

So pigs were bred, raised and sometimes eaten in different parts of Egypt. What of the religious connection? Votive faience pig figurines dating to the 1st dynasty have been recovered from Abydos, Hierakonpolis, and Elephantine Island.

The Egyptian Museum in Berlin also holds a ceramic statue, dated to the Naqada I period, of what has been called a pig deity, indicating at least that swine formed a part of religious life at this time. The Brooklyn Museum also possesses a cylinder seal dated to the First Dynasty that displays figures of bristling pigs carved on it.

Statuettes and amulets of a rooting sow nursing her litter representing the sky goddess Nut were popular. Conversely, incantations in the “Coffin Texts” and in the “Book of Going Forth By Day (Book of the Dead)” show Set turning himself into a boar, leading some to speculate that the pigs connection with “evil” is the real reason for its small use in domestic food consumption and sacred temple offerings. 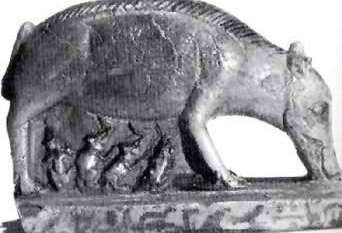 Finally, to round up this dissertation (at least for the moment) research into whether or not the pig was taboo becomes more muddied as it also played a part in medicine. The suggestion that humor of “pigs eyes” be injected into the ear to cure blindness is contained in the Ebers Papyrus. Another prescription for the eyes included pigs blood. Pigs teeth and other ingredients were crushed and bandaged onto infected parts of the body to expel exudations. Pigs viscera, including the brain, was an ingredient in another cure to combat a form of cancer.

Understandably, the more squeamish amongst the Egyptians may have decided to boycott an animal that they associated with pain, illness and death.

And to finish, a few last clippings: 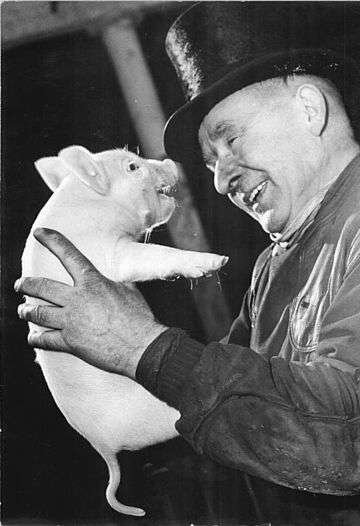 And that’s it for today. The next piece probably features meat. “Watch this space”…

Sources for the Egypt sections include:

[a] “Pigs in Ancient Egypt”, by Marie Parsons

Other items are culled from Wikipedia.