I recently bought another new skillet. This one is a 15″ monster to go alongside the smaller 10″ version I’d bought last year. There’s probably no kitchen utensil finer than this for searing and browning stuff  — unless you have a salamander like this below in your kitchen; most amateur cooks can’t spring for something that expensive and that big — and it’s even good for baking items in the oven; like corn-bread, the recipe at the foot of the page by Sean Brock being a fine example of that. 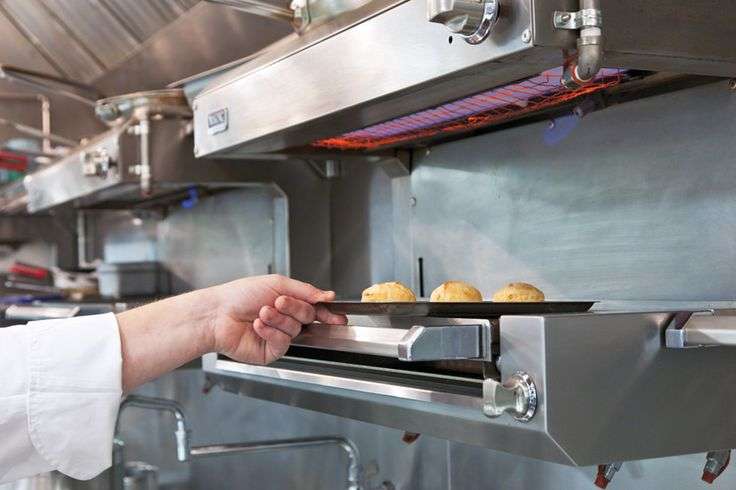 It arrived like the first one claiming (and very probably truthfully) to be pre-seasoned but, having already read widely and had the experience of the earlier one to fall back on, inc. this great piece entitled “The Truth About Cast Iron Pans: 7 Myths That Need To Go Away” by the very wonderful J. Kenji López-Alt of the Serious Eats website as well as the previously reviewed “The Food Lab“, I decided to start as I needed to go on. 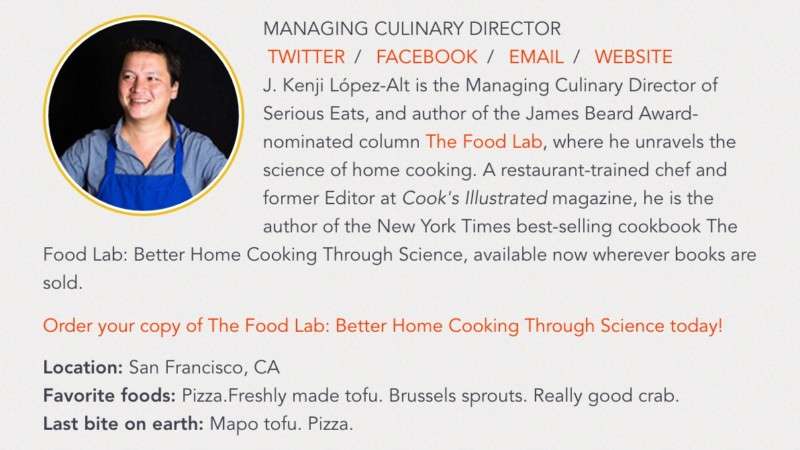 The process is simple — pre-heat an oven to as high as it’ll go (250ºC+, around 500ºF), rub a very fine film of vegetable or olive oil into the pan making sure it coats everywhere (use your hands!) inc. the handle and the base, taking care to remove all excess with a paper towel, place in the oven for around 60 minutes, then turn off the heat and wait for it to cool. It’ll take a long time to cool — up to 2 hours — so be patient. Cast iron is fantastic at retaining heat; that’s why it’s so good at what it does. The downside is that many a cook has unwittingly grabbed the handle too soon. Believe me, it hurts like a bastard. And the blisters take some time to heal. And you’ll feel like a dick. 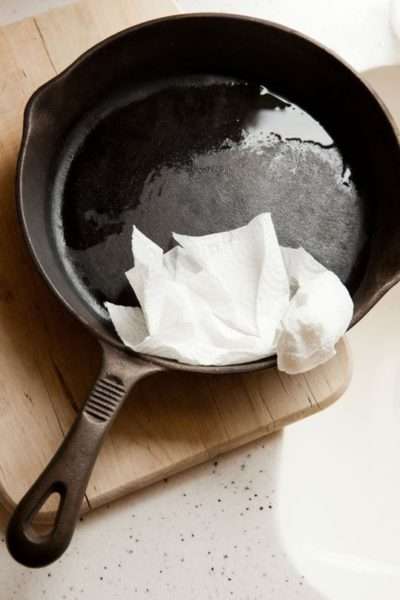 Coating with oil. Then removing…

“Rinse & repeat” as many times as you like until the pan shines. (NOTE: I don’t really mean rinse by the way. But then you knew that of course, didn’t you?)

The B&W photo below is taken after the first of 5 planned seasonings — a process that has to be repeated regularly every couple of months if the pan isn’t to degrade. But if you do as you’re told and stick to this discipline, then the pan will outlast you, it will outlast your children and it will probably outlast their children.

I think you’ll agree that it’s looking pretty bloody good already, the shine of the new coating starting to come up and at the same time, smoothing over the bumps that the modern manufacturing process leaves. 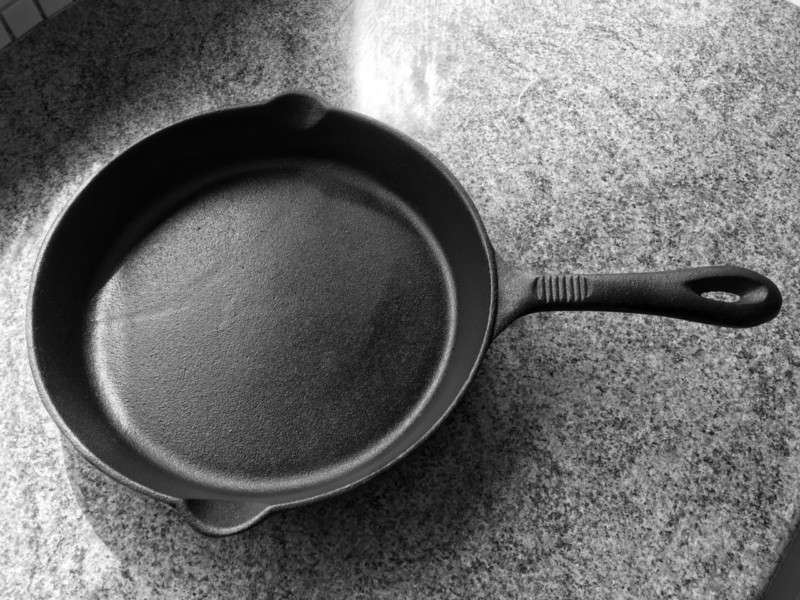 Really old skillets are smooth already as part of the production involved casting it in sand-based moulds, then polishing the resulting pebbly surfaces until all the little hillocks had been removed. So vintage cast iron tends to have a satiny smooth finish. By the 1950s, as factory production scaled up and was streamlined, this final polishing step was dropped from the process. The result? Modern cast iron retains that bumpy, pebbly surface.

Well, it does, at least until all your hard work and time invested, starts laying down a thicker layer of polymerised oil; the result left when the oil you’ve carefully rubbed over the surface (and equally carefully rubbed off — it’s molecules we’re looking for) breaks down under the intense heat of the oven into a plastic-like substance that has bonded to the surface of the metal. And this non-permeable layer is what gives well-seasoned cast iron its non-stick properties as well as smoothing over the lumps.

There’s even talk that pure flaxseed oil — because it contains more free-radicals than the more usual oils deployed — works more effectively and more quickly. Me? I haven’t yet gone to those lengths (it requires 18 hours, 6 seasonings and I’ve not had the damn thing that long) but the science seems sound, which of course appeals to the inner geek in me and so I’d say, if you have an old skillet that needs some TLC or you just want to experiment, then this could well be the right time to look at Sheryl Canter’s approach. Go for it!

By the way, I find can’t actually get the 15″ one into the oven; it’s just too frickin’ big. We may have to move to allow me to buy a bigger oven so that I can properly season this one…

If you get it right, it’ll look like this: 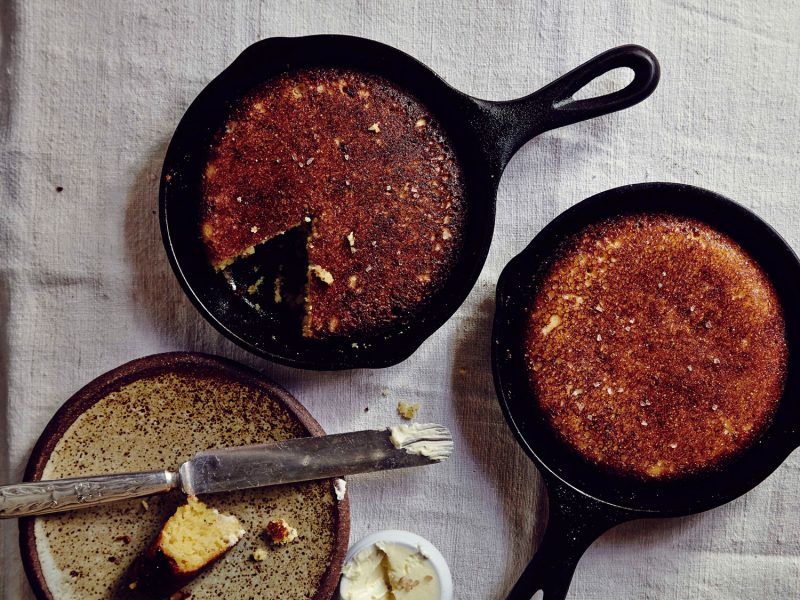