A truly offal project: from the oink, via the feet to the tail

Or, as the Swiss saying goes — the equivalent of our own “nose to tail” — “vom schnörrli zum schwänzli”.

I’ve banged on about this before (and no doubt will again in the future) but everything from the pig is edible — indeed, not just ‘edible’ but a wonderful, gorgeous, tasty gift, one that you ignore at your peril and to the detriment of your taste buds.

This post was partly prompted by a remark by a friend on Twitter claiming that “The Carved Angel Cookery Book” by Joyce Molyneux was the best set of offal recipes ever; I strongly disputed that (sorry Nick, you’re still wrong) and pointed out that, naaaaah, THIS one is canonical: Stephane Reynaud’s “Book of Tripe: and Gizzards, Kidneys, Feet, Brains & all the Rest” which I’d talked about before.

Mind you, Joyce is no slouch either and she covers Calves Liver with Gin and Lime Sauce, Escalope of Calves Sweetbreads with Piquant Sauce and Brain Fritters with a Tomato and Chilli Sauce. And as before, I can see the shudder that runs through some of you at the very thought of putting that sort of stuff into your gob* let alone chewing and then swallowing. But if you’re going to stick around here (and indeed, why wouldn’t you), I suggest you get over it and quickly.

*[NOTE: for trans-Atlantic readers, you can substitute “pie hole” for the word “gob”].

I’ll cover off using the pig “internals” in a later post. For the moment, let’s look at just these three edible items: the head, the trotters and the tail.

The tail you say? What good is that I hear you ask? The godfather of pork, the originator of the ‘waste nothing’ ethos, the mighty Fergus Henderson, has a recipe for it and says:

‘At other times I have sung the praises of how the pig’s snout and belly both have that special lipsticking quality of fat and flesh merging, but this occurs in no part of the animal as wonderfully as on the tail. You must ask your butcher for long tails.’ 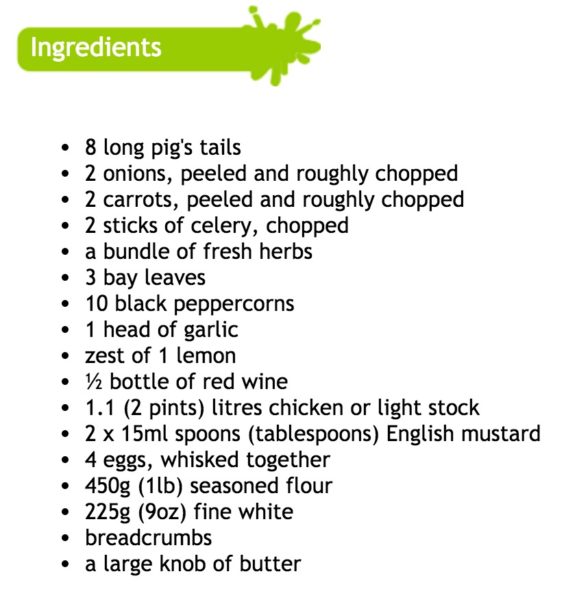 1. Put the tails into an oven dish along with the veg; add the peppercorns, crushed garlic, herbs, lemon zest, and the wine. Cover with the stock and seal under tin-foil
2. Place in a medium oven for around 3 hours, checking regularly so it doesn’t cook too quickly; you’ll know they’re done when you can easily pinch through the flesh
3. After removing from the oven, allow to cool in the stock but dig out the tails before it starts to turn to jelly. Drain any excess liquid off them and refrigerate.
4. When they’re sufficiently firm, get ready three bowls containing flour, egg and mustard, and breadcrumbs
5. Dust the tails through the flour, roll them in the egg and mustard mix and then finally coat them fully in the breadcrumbs, just in advance of the frying, else the crumbs will turn soggy
6. Using a large ovenproof frying pan or roasting tray hot, add the butter, turn up the heat and when it’s sizzling, add the tails rolling them around until they’re a golden colour
7. Put the whole thing into a hot oven for 10 minutes, turn them over — adding more butter if necessary –and roast for another 10 minutes or so
8. Finally serve them piping hot, with a watercress or red mustard salad. You might want to add a little tartness to their natural sweetness with a splash of malt or red wine vinegar on the tails. 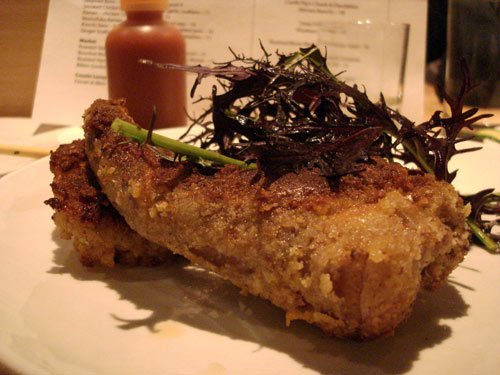 The feet. Pierre Koffmann was the first over here to make made trotters famous, with his oft copied stuffed pig’s trotter, dreamed up at his restaurant La Tante Claire and later eulogised by Marco Pierre White and others who also graduated from that place. The trotter is painstakingly deboned — it only takes him just over a minute to do this when presenting but believe me, it’ll take you a lot longer — and it’s then stuffed with a pork and morel mousse and served with the richest of gravies. Too much faff for me; but I’ll eat it!

But long before Pierre, Asian chefs had been making far more use of trotters than do we. Used to add flavour and viscosity to great effect to a Vietnamese pho or as the basis of the Chinese red braised pig’s trotters — using sugar, soy, Sichuan pepper, star anise — producing a a dish that’s sticky and gelatinous but hugely fun to gnaw away at. And the good ‘ole boys out of New Orleans & in the rest of the Deep South have deeply intertwined relationship with all things porcine, inc. the feet.

But, I’m again going back to Fergus and his use of trotters to make his rightly famed “Trotter Gear”. It was released earlier this year as something you can now buy off the shelf but he’s been making it for 20+ years at St. John’s. He uses trotters as the basis for a frankly, hugely unctuous and shockingly delicious jellied broth that will impart an intensely flavourful, lip-sticking quality to any stew or soup to which it’s added.

It’s a simple if slightly long-winded home project cooking, in a four- or five-hour process that ultimately yields around 6 wonderful cups of this glorious which can be used to punch up any recipe (did I sound like the odious Greg the Egg, skewered delightfully here, do you think?). 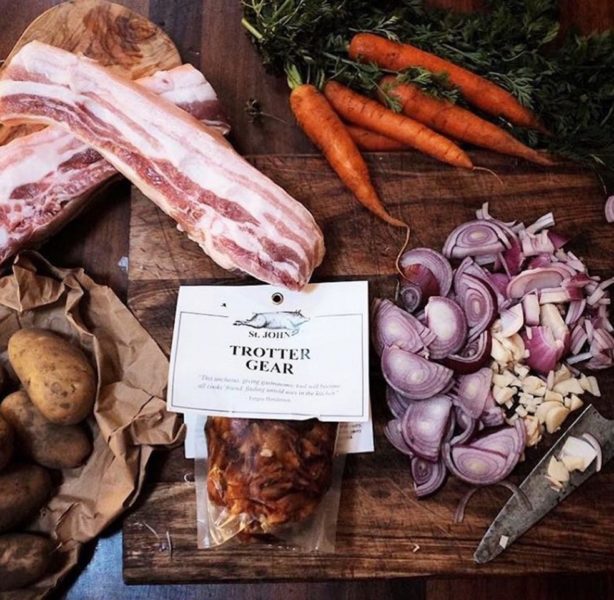 After that, the prep is easy enough. Place everything barring the liquids into a large pan.  Add all the Madeira wine and enough of the chicken stock to cover everything. Bring to the boil over a high heat then simmer for another 3 hours or so, until the meat falls off the bone and — in Henderson’s words — the trotters are “very wobbly.”

Remove the trotters from the pot, strain the stock and set aside. Pull the meat, flesh and skin from the bones and chop together (NOTE: there are rather a lot of bones which you can now discard, all of their goodness having by now entered into the stock). Lastly, stir the meat, flesh and skin back into the stock and serve. Simples. Or, rather than serve, you can safely freeze and then use this in dishes for up to 3 months.

Ah, the head! Rather daunting, no?

There’s guanciale, of course: cured and air dried jowl. Or Coppa di testa a ham made, like brawn, from the whole head. Brawn, along with Bath chaps, also uses the tongue — a lovely flavourful piece of muscle (just remember to get rid of the covering membrane) — along with the aforementioned jowl and the cheeks.  Jowls are also great; cooked confit, and then fried— they’ve a resultant quality that’s somewhere between fat and meat. To me, the ultimate grown-up pork scratching.

And let’s not forget the ears; good to chew on. Braised or boiled first, then sliced and finally fried until crisp. Or, as the Chinese do, boiled, sliced finely, chilled and then marinated in spicy oils. It’s a textural thing.

But one of the simplest ways to cook this is to grab a whole pig’s head from your friendly local butcher — ask them to split it in half — and then just braise this in the oven over a medium heat, with a bit of wine thrown in, for a few hours. The result? Crisp crackling, succulent and tender flesh, and an amazing gravy. It’s more like a pork roast than a pig’s head. Again, I can’t do better than reach for a description of the way it’s cooked by Himself, taken from a Guardian piece back in 2012. 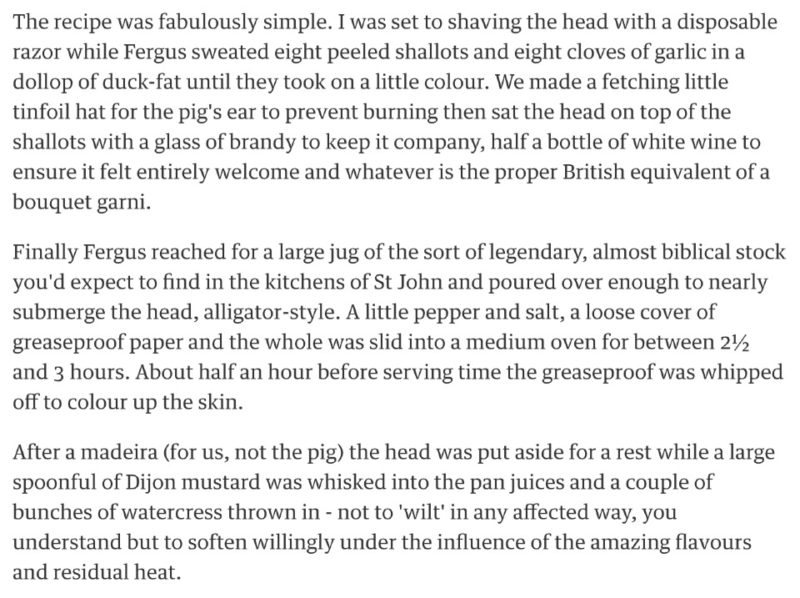 And one last thing for today?

Join up for the Pig Revolution and help to close factory farms – for good! Watch this