Charcuterie, smoking, curing, brining and all things porcine. Brought to you from deepest, darkest Cambs, England by Chris Bulow. In the smoker or in the kitchen.... Salutate porcum!

“A society grows great when old men plant trees in whose shade they know they shall never sit.”

I lay no claim to greatness but we have this lovely print on the wall above the fire as  a reminder of the importance of trees. 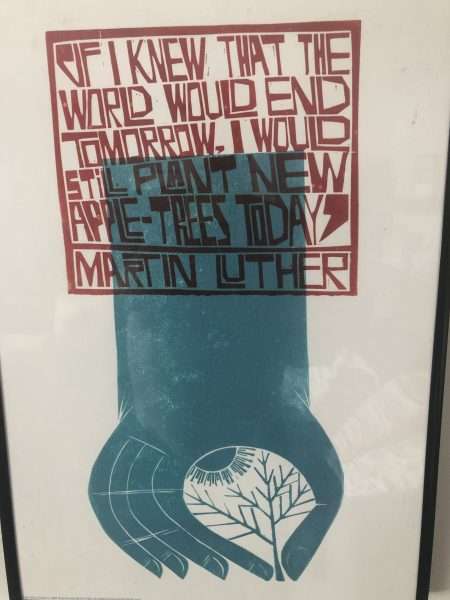 And have just got the oak sapling to stage where, in about 50 years, it’ll be a decent size. 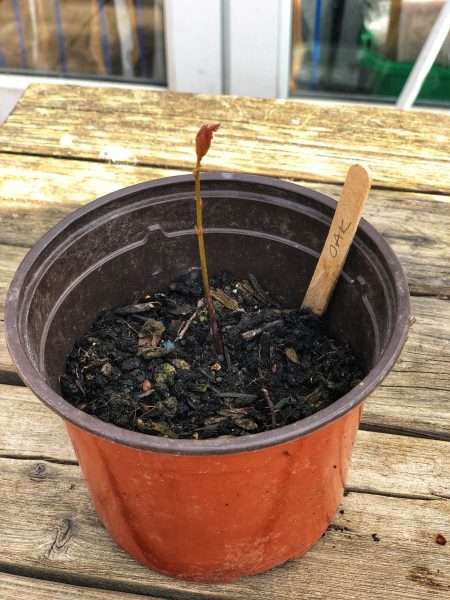 And this is how the cherry tree looks today. The bees, of every variety are in 7th heaven with the flowers and nectar on offer. 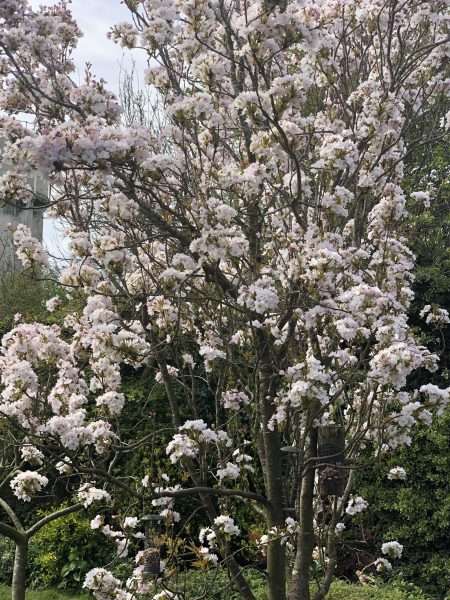 And finally, the wormery continues its magic, turning food scraps and bits of newspaper into stunning compost. A real circular ‘economy’. Fuck capitalism. 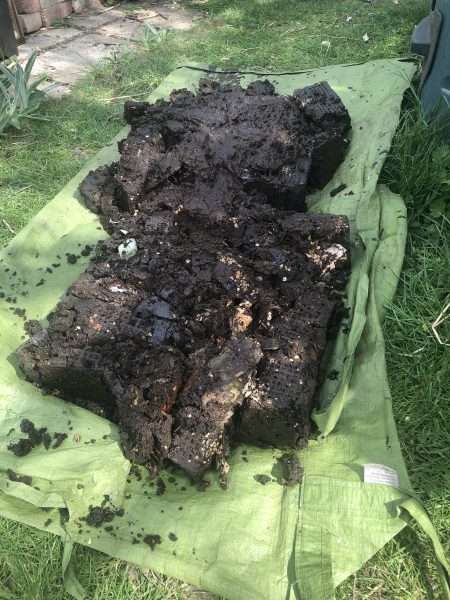 A lot of the world is going to hell in a handcart but we continue to plant. 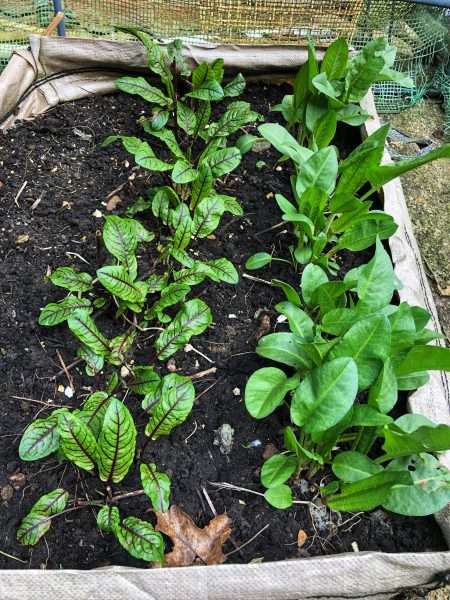 A year or so back, in a US TV report of a pitched battle between rival Hells Angels gangs, held in some nameless, mid-Western, flea-bitten, side of the highway, pit-stop, the police office attending used these memorable words to describe the scene of carnage that unfolded in front of him, when he first arrived. We now use them here for everything.

And the arrival today of this paperback delight, recommended on Twitter by Thom Eagle (op.cit. around here quite often), all the way from the land of Neil Young, Joni Mitchell, great, great food, maple syrup and the Trudeau dynasty, reminded me of this policeman’s words again. 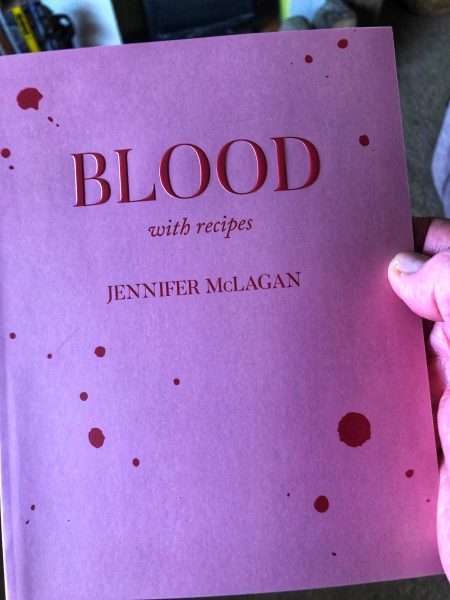 The author, Australian born Jennifer McLagan, whose site is well worth a visit, has been described as

“perhaps the most idiosyncratic and underrated cookbook author of our time.”

and has written some fantastic books inc. “Fat“, “Bitter“, “Bones” and “Odd Bits“, so you know, straight off, exactly where her head is at. I first came across her writing in the book “Offal: Rejected and Reclaimed Food 2016: Proceedings of the Oxford Symposium on Food” where she’d contributed a chapter titled “Blood, Not So Simple“, the title, I imagine, an homage to the blood in the first Coen Brothers’ film.

This mini book — there’s only around 30 pages — nevertheless manages to cover a wide range of uses for blood, especially by not just sticking with the more obvious use in savoury dishes but — in an attempt to woo those of a more squeamish disposition esp. those white, Westerners to whom blood is still something that’s supposed to stay hidden inside things rather than as something that can and should be ingested and eaten — also using it in breads, sweets and even cocktails. 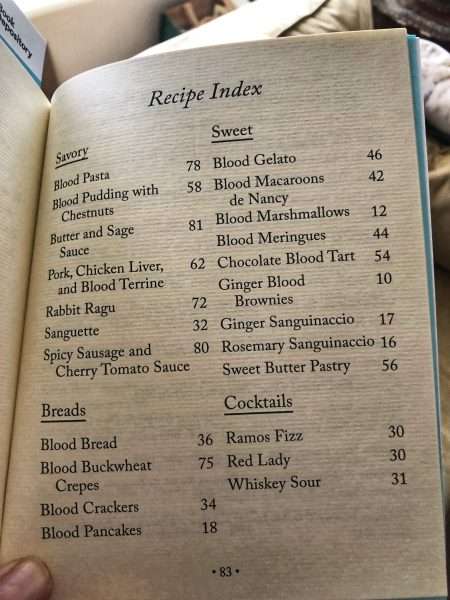 And thanks to her, I was reminded — having read this 40+ years ago, you’ll forgive me, I hope, that I’d long forgotten this detail — of an early description of the joys of blood pudding that came via Homer’s The Odyssey:

“Listen to me,” said Antinous, “there are some goats’ paunches down at the fire, which we have filled with blood and fat, and set aside for supper; he who is victorious and proves himself to be the better man shall have his pick of the lot; he shall be free of our table and we will not allow any other beggar about the house at all.”

And one last thing? Apparently Buddhist monks use their own blood to write (as Nepalese women, their own, plucked, hair to weave) to demonstrate their piety. There’s a long scholarly piece here, from last year, via Nature magazine.

The thanks for giving me that detail, go to Val but she’s not responsible for the subsequent ear-worm of

“If I could stick a knife in my heart
Suicide right on stage
Would it be enough for your teenage lust
Would it help to ease the pain?
Ease your brain?”

As a callow youth of just 17, I well remember the accompanying, laughably camp, “sailor suits in bubble bath” video…

Whilst bacon possibly isn’t the first ingredient that springs to mind when you start thinking about Japanese food, you may be surprised at how often it’s used over there. It’s popular on izakaya (those small pub or tapas like bars scattered in every city) menus where items like scallops or asparagus come wrapped in bacon, grilled over charcoal on konro or hibachi grills and then drizzled with a soy-mirin glaze and we’ve even seen it used in okonomiyaki (the street food pancakes that we enjoyed in Osaka).

This recipe for curing bacon has a distinct Japanese hue to it, thanks to some inspiration from the (possibly insane) Scott Hallsworth of Korobuta fame.

This’ll yield around 800g. of “angels dancing on your tongue” bacon. Do it right and it should look like this 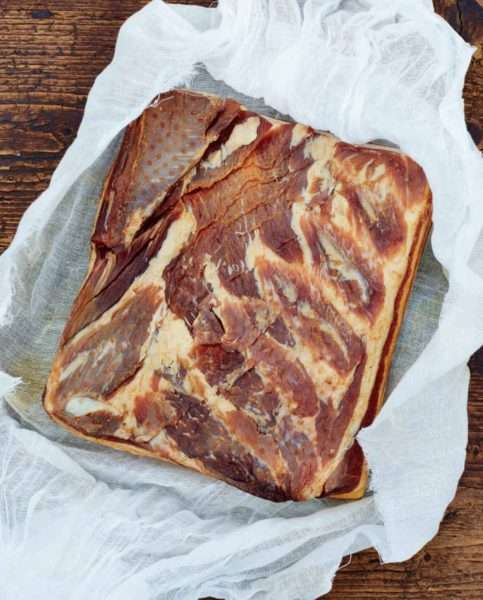 You’ll need to start with a 1kg piece of (boneless) pork belly. You can leave the rind on by the way.
The cure I use here, will make enough for 2kg pork but will store well or you can use as part of a kimchi mix
1kg fine sea salt
80g Sichuan peppercorns
30g dried red chillies
570g dark brown or cane sugar
20cm piece kombu
Firstly, in a hot pan, toast the peppercorns. Toast not burn. Then blend — at a fine setting — all the rub ingredients together in a spice grinder. I’d suggest using a pair of gloves (or, if you use your bare fingers, don’t then touch any ‘sensitive’ bits of your body with them before you’ve washed them thoroughly!) to help rub the mix vigorously into the pork belly. You’ve got to give it a firm, almost Turkish baths type massage, whilst at the same time, you caress it, so all the cure is really well rubbed into all the nooks & crannies. Finish it off by adding an extra coating layer for good luck.
Next grab some muslin. You’ll need enough to be able to triple wrap the pork belly. Use some kitchen string, to bundle it up tightly and secure with a knot or two, just like you were wrapping a bow around a present. Now you’ve got to hang it by one of these bows from a shelf in your fridge. For 4 days. And it’s really important that the bacon isn’t touching anything. If it does, it can attract a build up of moisture, which’ll lead it to spoil. The aim here is to allow it to carry on drying out, which lets the flavours develop as it cures.
On day 5, unwrap your parcel, rinse off the cure then dry well with a paper towel or tea towel. Rewrap as before but in some fresh muslin. Now for an even longer wait…
Hang it once again from a shelf in your fridge for 2 weeks.
When it’s time to use, cut carefully into long delicious slices. Use up any trimmings in stir-fries, risottos, or just fry them until crunchy and blend it into a big, fat, porky homemade mayonnaise. Finest kind.

Max Halley (op. cit.) reminded me of the addictive delights of a malt loaf. So I just had to buy a Soreen loaf, the thought of which took me back to Sunday afternoons at home with Mum & Dad and siblings, when we’d get slices of malt loaf — as thickly buttered as I could get away with — to eat in front of the fire and the TV. Sheer joy. How could you not love something that markets itself as “deliciously squidgy energy”? 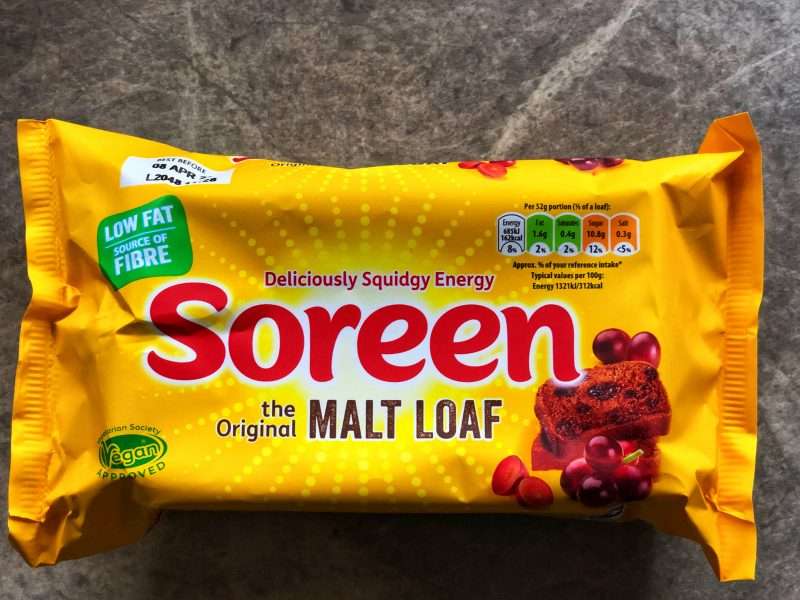 So, with some truly amazing self-control, I’ve yet to broach this pack. I’ll be going in thick with the butter though — Mum isn’t here to growl at me — using some of the wonderful cultured, fermented, butter from Ampersand. 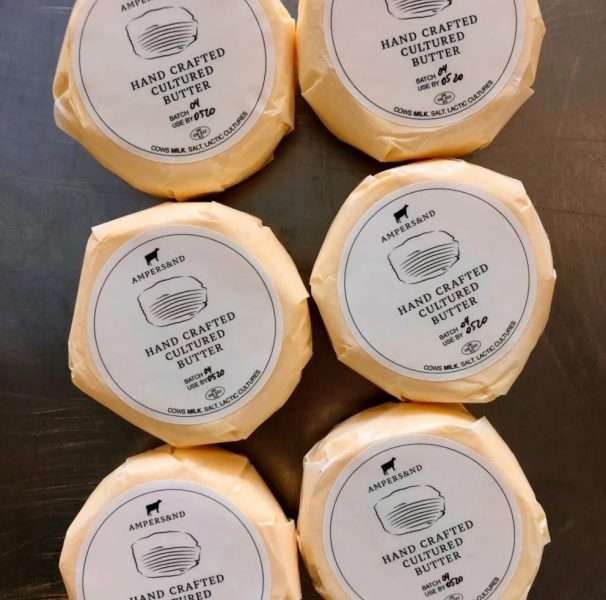 I found out only today that (a) Proust started out using toast rather than madeleines in his “A la Recherche du Temps Perdu” and (b) that malt loaf was actually a Scottish invention from the late 19th Century and thus not as exotically foreign as I’d thought before.